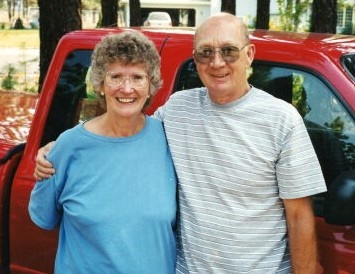 Alberta was born September 26, 1931, in Lewiston, Idaho.  Alberta was married to Ray Heilman for 18 years and had 5 children, Ella, Ray, Robert, Richard, and James.  In 1979 Alberta met DelRay Pehrson and fell in love adding DelRay's 6 children, LaRae, Randy, Sheila, Tony, Shawn, and Lynn to her family.

Alberta lived a full and active life.  She was a member of the Lake City Tappers.  She started her tap dancing at age 75.  She enjoyed performing at the North Idaho Fair and various retirement communities through Coeur d'Alene.

DelRay and Alberta were serious crafters.  Alberta is known for the scrubbies she crocheted.  They traveled to craft shows throughout North Idaho and Spokane, WA.  Alberta continued her crocheting up to her last days.

DelRay passed on July 10, 2017.  Alberta was devasted.  She lived with her son James until the last month of her life.  She enjoyed trips to the Coeur d'Alene Casino and visiting with her grandchildren and great grandchildren.

On Saturday, August 7th, 2021, there be a celebration of Alberta's life at the English Funeral Chapel in Post Falls Idaho.  It will be an open house between 2:00 pm and 4:00 pm. The address is 1700 N. Spokane St. Post Falls Idaho.

To order memorial trees or send flowers to the family in memory of Alberta Heilman-Pehrson, please visit our flower store.
Send a Sympathy Card