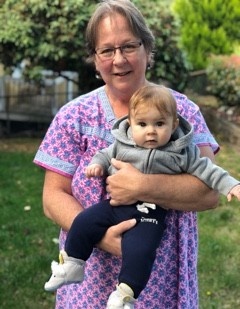 Bettina "Tina" Peterson, 62, of Coeur d’ Alene, Idaho, passed away Wednesday, November 23, 2021 from cancer, which she bravely fought for over five years.

She was born in Missoula, MT October 21, 1959, the daughter of Ivan C. and Geraldine M. (Yanta) Adams. Raised and educated in Missoula, Tina was a bright student, whose creativity, writings, and penmanship were unmatched. She was a passionate and an accomplished quilter, creating quilts for many of her family and friends. The quality of her eiderdowns was worthy of artistic wall hangings in one’s home.

In 1978, Tina met and married John Peterson in Helena, MT. After the birth of their daughter, the couple moved to Texas for his work with the phone company. They later divorced, and Tina returned to Helena where she began her career with Department of Family Services (DFS). She welcomed a son in 1988.

Her career path in Helena took her many places; she worked briefly with the IRS as a clerk/typist; a short time later, she became a VISTA Volunteer for the Friendship Center, Adult Learning Center, and the Montana State Foster/Adoptive Parent’s Association with DFS.

Along with her clerical duties, she developed Public Service Announcements for TV and radio, designed advertisements, and wrote articles for the local newspaper. She established a resource library and informational flyers for the Battered Women’s Shelter, and helped raise funding for these causes. She also recruited volunteers to assist in managing the clothing bank for shelter.

After a brief stint with the Lewis and Clark County DFS in Helena, she was hired by Southwest Region DFS and did extensive work in Foster Care and Adoptive Parents program.

In 1993, Tina moved to Missoula to be closer to family, and where she worked for Missoula County DFS. Tina remarked often the family was privileged by the fact that she worked for DFS, her twin brother was a highway patrolman, her younger sister a detention officer, and her dad a cook at the same detention facility. She felt the family was a complete package in public-service work.

While in Missoula, Tina met Max Lane, and the couple remained together as loving companions for more than 20 years. The couple in 2005 moved to Coeur d’Alene, where she remained until her death.

She was preceded in death by her parents; Tina is survived by her loving companion, Max; two children, Liz, Seattle WA; Mike (Jayme), Denver, CO; a brother, Ivan C. Adams Jr. (Deanna Sue), Brigham City, UT; her twin brother Bryan (Sue), Bozeman, MT; her younger sister Barbara (Jeff), Stevensville, MT; a beautiful and vivacious granddaughter, of whom she was so proud; and numerous nieces and nephews.

A burial service for Tina will take place in Montana in the Spring of 2022.

To order memorial trees or send flowers to the family in memory of Bettina "Tina" Peterson, please visit our flower store.
Send a Sympathy Card