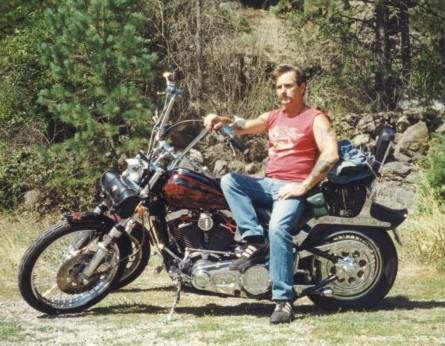 Bill Ray Porter (74) passed away on August 9th, 2019 in Dalton Gardens, Idaho. He was born on March 30th, 1945 in Hobbs, New Mexico to Eldon and Margaret (Gordon) Porter.
Bill moved from La Pine, Oregon to the Coeur d’Alene area in 1973. He graduated from North Idaho College from the 1988-1989 Class for Small Engine Repair, which was taught by “Round Man” Big John.
He worked as the Superintendent of the Wastewater Treatment Plant. Bill also worked for the City of Coeur d’Alene and he built the “Coeur d’Green” Compost.
Bill was an adventurer and an avid motorcyclist at heart. He loved riding and traveling all over.
Bill is proceeded in death by his son Vincent Dean Porter.
He is survived by his wife, Susan Porter (Dalton Gardens, ID); son, John David Porter (Post Falls, ID); daughter, Angela C. Porter (Missoula, MT); Grandson, Jacob Wright; and Great-Granddaughter, Jazymine Wright.
A viewing will be held on Friday, August 16th, 2019 from 11am to 3pm at English Funeral Chapel. 1133 N. 4th Street. Coeur d'Alene, Idaho 83814.
In lieu of flowers please make donations to a local charity of your choice.

To order memorial trees or send flowers to the family in memory of Bill Porter, please visit our flower store.