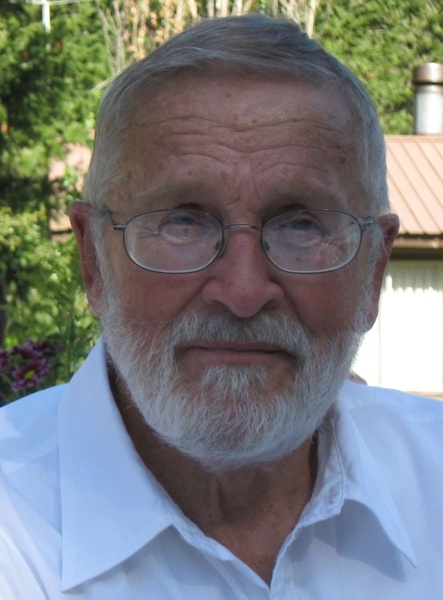 Bill Toliver, 90, passed away on July 4, 2020. Bill was born in October 1929, just before the stock market crash. He left high school when supporting himself with 2 jobs and going to school became too much for the young man and joined the US Navy. He proudly served in the Navy for 20 years retiring in 1968.

After retirement, Bill, his wife, Irene, 4 children, and a dog moved to Saudi Arabia to work with the Saudis in the use of U.S. equipment. After their return from Saudi, when the oldest was high school, the family moved to Liberty Lake, WA where he worked in the engineering department for General Instrument in Post Falls until their manufacturing move to Mexico and subsequently worked for various engineering or tech companies in Fort Worth Texas, Chicago and finally in Portland Oregon.

Upon another retirement, he returned to Coeur d'Alene and married Bobbie Richards in 1992. The couple were active members of Unity church in CDA. Bobbie joined the Foreign Service and she and Bill continued the adventure in Lagos, Nigeria where Bill managed in the American Embassy hotel, grocery store, cafeteria, and recreation sites.

The next post was Berlin, Germany where he was the Family Liaison Officer. After Returning to Coeur d’Alene, they bought an RV and went traveling yet again. They finally settled in Sierra Vista, Arizona for 12 years where Bill was active in the Elks and Masons. Health issues brought them back to the Coeur d’Alene area in 2016.

Bill leaves his wife Bobbie at their home in Post Falls, 3 children, Pete, Holly and Kelley and 4 grandchildren in Seattle, Wa and Son Bill and 2 granddaughters in Santa Barbara, Calif. Bill will also be sorely missed by 3 step children, 7 grandchildren and 4 great grandchildren in north Idaho and Aurora, All who consider him Dad and Grandpa.

His was an adventurous life well lived. He will be missed by all who knew him.

Due to the current pandemic, no service will be held at this time.

Please remember him as you knew him and cheer him on to his next adventure.

A human being gracefully parted company with us today.
This one earned his way — at every single step — with nothing handed to him.
Ever.
Born into crushing poverty, 20 days before the Great Depression.
His too-young mother left by the time he was 3. His father died when he was 8.
He was handed from house-to house, surviving years of abuse.
Taking care of his two brothers and sister — deciding to become his own role model.
Living by himself during high school he dropped out to become a sailor.
Flying off the decks of aircraft carriers for 20 years.
Surviving a plane crash into the sea, and two crash landings.
He worked longer and harder than the next guy
Providing a good life for both of his wives and four kids.
Raised his children in the developing world. Not as a diplomat, but as a blue-collar worker.
No tour buses for his brood, only taxi rides to experience how real people live in 30-countries.
Instilling a deep sense of honor, empathy and purpose in each of his kids along the way.
He was an explorer and adventurer. Constantly learning and evolving.
Those who were part of his journey can only look back on it, shaking their heads with a smile.
Each of them grateful for a hell of a ride.
He was deeply flawed. Foul-mouthed. Tough as nails.
Able to turn “ripping you a new one” into an art form.
But always had your back. Always.
The kind of “man’s man” who never hesitated to kiss his sons.
And share his big heart with friends and family.
He was William Harris Toliver Jr.
And the world is a better place for him having been among us.

The fourth of July was such a fitting day for my Dad to pass away. He
not only had a deep love for his family, but also for America.
My Dad served in the Navy for 20 years, something of which I am very
proud. He joined as a teenager and worked his way up to Master
Chief Petty Officer, the second highest enlisted rank in the Navy. He
was one of the youngest to achieve this rank at the time. His time in
the Navy provided him with all the things he needed – strong role
models, discipline, friendship, a chance to see the world, and the
opportunity to learn skills he could use throughout his lifetime. It was
also while in the Navy and stationed in Hawaii that he fell in love with
and married my Mom, Irene. Together they had four kids – Bill, Pete,
Holly, and Kelley.
The Navy instilled in my Dad a sense of adventure that continued long
after he retired in 1968. In 1972, he accepted a position as an
Engineer with Northrop Corporation and moved our family of six (and
our dog) to Saudi Arabia. The next seven years of our lives were
spent experiencing the Middle East, exploring many other countries
around the world, and making friends with people of all different
nationalities and backgrounds. This period of time in our lives taught
us to be adaptable, to embrace new experiences, and to be patient
(like when I had to wait four months for a skateboard to arrive after
ordering it from the Sears catalog). So much of our childhood was
filled with fun and adventure and I will forever be grateful to my Dad
for that.
Another thing I admired about my Dad was how he could fix or build
anything, with or without instructions. A radio would break – he could
fix it. We needed a new shelf or bed frame – he could build it from
scratch. He was beyond talented in this way and I cherished the time
I sat with him as a kid in the garage where he had his workshop and
watched him tinker with different projects. I learned a lot just by
watching, how to fix things myself and what all different kinds of tools
were used for. There were so many different skills he took the time to
teach his kids.
My Dad was also chivalrous. Even when he was no longer able to get
around very well and had to use a cane to help himself walk more
steadily, he would scowl at me if I tried to hold something like an
elevator door open for him so he could enter first. Instead, he would
use his cane to block the door and have me walk on to the elevator
first. I loved that about him.
I could probably fill a book with the things I loved and admired about
my Dad. He lived a good, long, adventurous life and I was very
blessed to have had him for my Dad.

To order memorial trees or send flowers to the family in memory of Bill Toliver, please visit our flower store.
Send a Sympathy Card