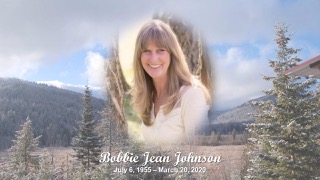 Bobbie Jean Johnson, 64, of Priest River, Idaho, passed away from a heart attack on Friday, March 20, at the Kootenai County Medical Center.

Bobbie was born July 6, 1955, in Portsmouth, New Hampshire.  Her father worked for Morrison-Knudson, and as a child she got to travel and live in many different places because of his job.  When she was 12, they moved to Boise, Idaho, where she lived and went to school. In 1973, she earned her GED and decided to attend beauty school in Boise.  In 1975, she met Paul Smith.  They had a really great time and by the next year had their first child, Jason Rettig Smith, in June 1976.  In July 1976, they decided to leave Boise. They packed up all they had in their 1957 Dodge Power Wagon and pulled a little travel trailer to Priest River, Idaho, where they had 15 acres on Hoodoo Mountain.  They arrived that summer and quickly started building a 16x16 square foot cabin to live in.  They were able to move in at the end of October just before winter arrived.  They spent that first winter up on the mountain with baby Jason.  There was no power or running water, but they had a warm stove and oil lamps and they loved it.

The following year in 1977, they decided to get married.  The next couple of years, they continued to carve out a place on the mountain. They grew their own food, made their own clothes and supported their little family.  In 1979, they invited their close family to North Idaho to help them add an addition to their little cabin.  When they were finished, they had a 16x32 two-story house. In spring 1980, they welcomed a new baby girl to the family.  They named her Lyla Rose Smith, born March 8, 1980, in their family doctor’s house in Sandpoint, Idaho.  The following year in spring 1981, they were able to get power and running water to the house. We are told that was a very exciting moment!  That September, they welcomed their third child, Justin Lloyd Smith, born in their home on September 08, 1981. In spring 1982, Bobbie decided to become a Christian. She joined the Seventh-day Adventist Church and was baptized in the Pend Oreille River.  She made lots of new friends there, who became lifelong friends to this day.  She became the youth leader and was also in charge of all the crafts at Vacation Bible School for several years. In 1984, they welcomed their fourth and final child, Jared Paul Smith, born in their home on April 28, 1984.

By the late 1980’s, the kids were getting old enough that Bobbie decided to go back to work as a beautician.  She cut hair in Sandpoint for about the next 10 years.  In 1998, Bobbie got divorced and decided to go back to school.  She attended North Idaho College and studied graphic design.  By 2000, she was working at a graphic design shop in Sandpoint.  Around this same time, she met Brad Johnson and they started dating.  She married Brad in summer 2002.  She continued to work in graphic design and also help her husband with his drywall business.  In 2004, she and Brad decided to buy a Jack Russell Terrier.  His name was Harley, and they liked him so much they decided to start breeding Jack Russell’s on the side.  This quickly became a successful business and they started breeding Cairn Terriers and Shiba Inu’s as well.  Bobbie loved this job and eventually quit doing graphic design to stay home and breed dogs full time.  In September 2011, Brad was tragically killed in an automobile accident.   Bobbie had a very hard time, but with the help of her family and close friends, she was slowly able to move on.

About three years later in fall 2014, she decided to remodel her house.  This is where she met Edward Cockerel (Eddie).  He was hired to paint her house and she quickly formed a bond with him.  By the following summer, they were living together and had a very loving relationship.  In 2016, she and Eddie decided to start a new adventure together.  They formed Cojo Olde English Bulldogges.  They really enjoyed this breed and had a great time raising and selling them.  Over the next five years, Bobbie had a wonderful life spending each day with  Eddie, and loving all the children and grandchildren.

It is really hard to put down in a few paragraphs what Bobbie Johnson meant to her family and friends.  She always had an extra $10 for gas or a movie for her kids growing up when she didn’t have a lot to spare.  She was so quick-witted and funny with a joke that would make you laugh with her so hard.  She always had a twinkle in her eye and a smile that let you know you were loved and there was nothing to worry about—even in the hard times.  She was the best cook and loved to have wonderful holiday parties.  She really was the best friend, mom, and companion you could have.  There is a hole in our hearts that can never be replaced—but we do have our wonderful memories of her.  She will continue to be a blessing to us, and she will be forever missed for the rest of our lives.  Thank you all for thinking of us and praying for us at this time.

To order memorial trees or send flowers to the family in memory of Bobbie Johnson, please visit our flower store.
Send a Sympathy Card