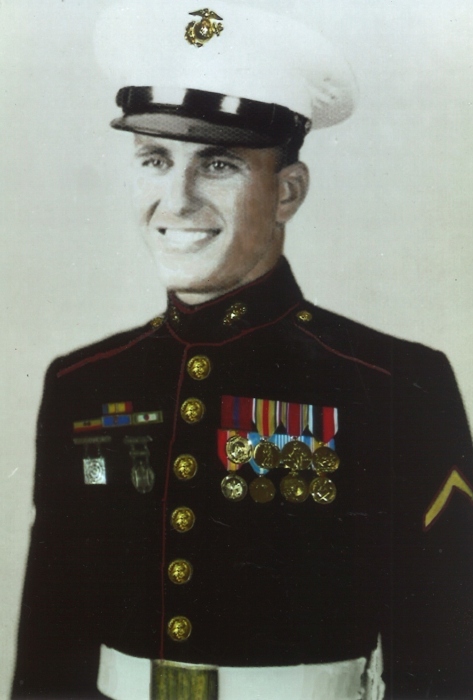 Bobby’s growing up years in Texas were difficult, as the nation was in the grip of depression. His mother, older brother, Troy J., and an infant sister all passed away. Bobby, who was about 18 months, was left in the care of family members who could take him while his dad left home to find work.

Bob’s dad was remarried to Helen Kritzberg, and the family moved to California to find work in the shipyards. In 1946, when he was still 16, his dad signed papers for him to go into the Marines. He loved the Corps and served for three years and was honorably discharged. He attended Grant Technical College for a while and then re-enlisted in the Marine Reserve, in 1949. He was called to active duty in July 1950, and served one year in the Korean War in the following battles: Pusan Perimeter, Landing at Inchon, Chosin Reservoir and the China Spring Offensive in 1951. He was honorably discharged in August 1952.

In 1953, he met the love of his life, Joyce Lick, and they were married. They moved many places for Bob’s work over the next 28 years. They had three daughters, Helen, Carol and Roberta. Bob was a wonderful husband and father, always putting his family first. After raising their daughters they became empty-nesters.

He retired after 31 years of employment with the federal government as a munitions specialist and inspector, and they moved to Coeur d’Alene, Idaho in 1981. The things that drew him to Idaho were the great hunting and fishing, and there was a whole lot less people. They became involved in their new church’s activities. He was active in his church, the Marine Corps League, Toys for Tots, Young Marines, F.C.F. (a Christian men’s fraternity) and Royal Rangers (a boys’ program for Christ).

He lived his life by the Marine Corps motto: “Semper Fidelis” — Always Faithful.

He is preceded in death by his father, mother, brother, sister and one daughter, Carol Robinson Cozby, and her husband, Brad. He is survived by his wife of 66 years, Joyce Robinson; two daughters, Helen Robinson and Roberta Robinson Ewert and her husband, Larry Ewert; one grandchild, Travis Ewert and his wife, Aimee Ewert; and his first great-grandchild, Jackson Ewert. Bobby also left behind many relatives, aunts, uncles and cousins.

The coronavirus postponed any earlier services. A memorial service will be held at 11 a.m. Thursday, July 16, 2020, at The Canvas Church located at 2200 N. Seventh St., Coeur d’Alene, Idaho. Rev. Nathan Day will be officiating.

To order memorial trees or send flowers to the family in memory of Bobby Robinson, please visit our flower store.
Send a Sympathy Card