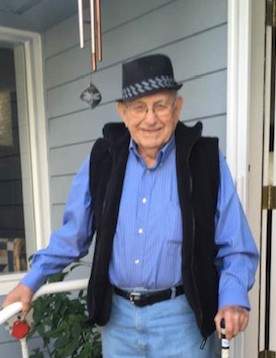 
Carl William Anderson (92) It is with great sadness that the family of Carl William Anderson announces his passing on July 28, 2019 peacefully in his home in Medimont, Idaho with his loving wife at his side. Carl was born on August 5, 1926 in Jordan, Montana to John and Dorothy Hurt Anderson.

Carl was the oldest of four boys, his brothers are Ray, Lee and Don Anderson. Carl was only 7 years old when his Mother left this frail existence. His Father and brothers moved to several states but Carl considers Medimont, Idaho the town he grew up in. Carl always had a love for his Father’s homeland Sweden. He was able to visit Sweden and meet many family members.

Carl served in the US Navy as Apprentice Seaman in World War II. After the Navy Carl returned to the Medimont area finished high school and bought drove a school bus that he purchase from his Father. Carl held other jobs in his life such as working for a dairy and milking cows, worked for highway district for two years, drove logging truck for seventeen years, Bunker Hill for ten years and for the last thirty-two years until he was 85 years old he worked at the Flaherty’s Powder Horn Ranch. When Carl was twenty-four years old and working for the highway department there was a corner of land of 3.4 acres that caught his eye. Carl purchased that land that he loved so very much. Carl never moved from that land raised his family there and his wish was granted that he wanted to die there.

Carl served an Latter-day Saints mission with Naomi in Wallace Idaho. He also served his church in the Bishopric several times, Branch President and Sunday school President but his favorite was being a Home Teacher or Minister as they are now called. Carl loved to serve others.

To order memorial trees or send flowers to the family in memory of Carl Anderson, please visit our flower store.