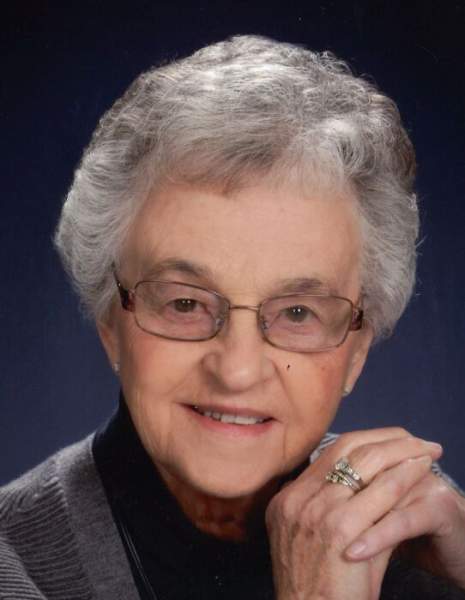 Catherine Ann Jacobson, 96, lifelong resident of Coeur d'Alene, was called to her heavenly home in the early hours of Friday, January 14th, 2022.  Catherine spent her last hours surrounded by, and in the loving embrace of, her family.

Catherine was born on December 13, 1925, in Coeur d'Alene, ID.  She was the first daughter, and second oldest of 9 children born to Earl and Gertrude (also born in Cd'A) Dawson of Coeur d'Alene, ID.  As Catherine unexpectedly arrived, she was delivered by her father in the home where she grew up.

A woman of great faith, Catherine was a lifelong member of St. Thomas the Apostle Catholic Church. She attended the Catholic schools including Immaculate Heart of Mary (IHM) Academy, which at that time was the old army barracks in Coeur d'Alene's Fort Grounds.  She graduated Salutatorian of her class which she often joked was no big deal as her class had only 13 students.  After graduation, Catherine worked as a secretary for the president of the phone company in Spokane, WA.  As she didn't like the daily commute, she soon got a job as a dental assistant in Coeur d'Alene.

In August of 1946, while riding bikes with her lifelong friend, Catherine met Thomas H. Jacobson.  Tom asked her out that very day and proposed just four months later.  The couple were married ten months after that, on October 11, 1947.  Catherine and Tom were married for 65 years when Tom passed on January 29, 2013.  They had seven children: Pat, Rick (June), Judy (Doug Cornutt), Dan, Ron (Susie), Jan (deceased), and Anna (Jeff Wood).  One of the saddest times in Catherine's life was the passing of her "little Jan" whom she lost to a brain tumor on July 4, 1963, at just over 3 1/2 years old.

After Tom's passing, Catherine and son Pat moved from the home she'd lived in, for 58 years, to Garden Plaza retirement community. Here she lived out her life with many new friends with whom she enjoyed playing cards and other games, watching favorite tv series and just visiting. Catherine especially loved watching "her" ZAGs play, (she seldom missed a game), and watching game shows, her favorite being Jeopardy.

Catherine counts, as her greatest blessings, her long and loving marriage to her devoted husband and best friend, her children and their spouses, her 22 grandchildren, 42 great-grandchildren, 1 great-great grandchild...and more sure to come.

In God's plan, the greatest gift of life is the joy to be found in death, in His arms.

Memorial contributions can be made to St. Vincent de Paul, of Coeur d'Alene.

Your browser does not support this video format. You should be able to view it in Chrome, Safari or Internet Explorer.
To order memorial trees or send flowers to the family in memory of Catherine Jacobson, please visit our flower store.