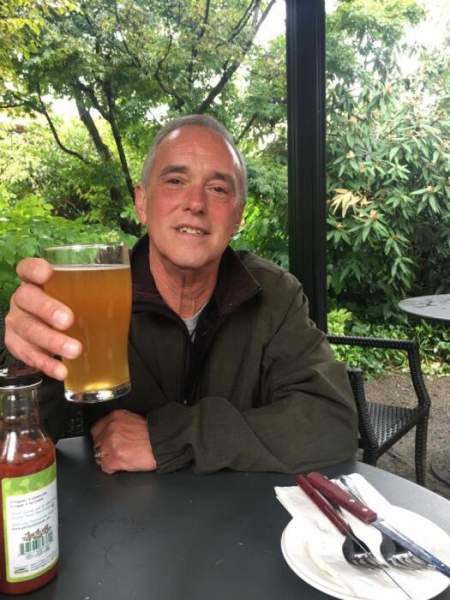 Born November 4, 1948, in Chicago, Illinois, Chris was adopted by parents Elmer and Sarah Jane “Sally” Copstead. As the son of a federal fisheries agent, he and his sister Jane, two years his junior, grew up throughout Alaska in small fishing villages until moving to Astoria, Oregon,when he was in junior high school.  After graduating high school, Chris moved to Tacoma, Washington, to attend Pacific Lutheran University for a short one year stint - but he would proudly proclaim for years that he was “kicked out” after the first year.

Chris returned to the Astoria area after about five years, now a father himself to Brent, Dain, and Garad. It was his experience as a shoe salesman at Bill’s Department Store in Astoria and as a “carnie” (carnival worker) in the tourist enclave of Seaside, where he cultivated his love of community. He was an operator for the “Wild Mouse” roller coaster when he met and fell in love with Deborah Capaul, from Coeur d’Alene, in Seaside working a summer job.

His love for Debbie took them to North Idaho, where her (very large) family was located, a community they chose to call ‘home.’ Married in 1978, Debbie cherished Chris’ children and helped raise them like her own. They had two kids together, Adrienne and Mitchell. His five children were his proudest accomplishment.

Shortly after arriving in Coeur d’Alene, Chris’ sense of ‘community’ took hold. Anyone who knew Chris knew him as part of everything the city had to offer. He began as a salesman for The Inkwell, a small chain of office supply stores throughout North Idaho and Eastern Washington, until the original owners retired and Chris became a business owner.  When his love of Mita copiers and Brother electric typewriters dwindled, Chris ventured into the Coeur d’Alene nightlife when he opened the downtown teen dance club, “The Spotlight.” Creating a place ‘for teens’ and ‘by teens’ was important to Chris, so he enlisted a teen advisory group to set the establishment’s direction. During the website boom from 1998-2000, Chris joined his eldest son, Brent, in establishing USA-Sites.com, where they helped many North Idaho businesses establish an online presence in those early years of the internet. He also worked as Marketing Director for BeeHive Homes and later took on North Idaho Publications from Kagey Company.

Chris was a staunch advocate for the Coeur d’Alene community and served on numerous boards and committees. As President of Panhandle Kiwanis Club 1990-1991, he spear-headed the original McEuen Park gazebo and was named “Kiwanian of the Year” for 1991. He was a long-time member and chairman of the Coeur d’Alene Area Chamber of Commerce.  He drove the Chamber of Commerce “Commodores” parade float and Miss Coeur d’Alene all over the Northwest and Western Canada; in 2000, he received the “Ed Abbot” award for volunteer of the year.

Chris served for more than a decade on the City of Coeur d’Alene Planning and Zoning committee. He worked alongside his buddy, Jeff Conroy, to begin “Souport the End of Homelessness,” an annual winter ‘soup-cooking contest’ fundraiser event for the Saint Vincent dePaul Society that has amassed a large annual following. Chris served on the Coeur d’Alene City Council from 1996-2004, where he helped bring the IRONMAN triathlon to town.  He was an IRONMAN contestant himself in 2007. Chris volunteered with the “Junior Miss” program as Master of Ceremonies for many years, as well as participating on the judges panel.

Chris was married to his wife Debbie for 30 years, until she succumbed to ALS in 2009.  After three decades serving his Coeur d’Alene community, Chris moved to Bothell, Washington, in 2014, where he spent the last five years with his companion, Vickie Pickering.  Vickie brought much joy, adventure and friendship to his life.  He enjoyed post-retirement employment, working in maintenance and transportation for assisted living facilities. He often told stories about the residents and how much laughter and love they brought into his life each day.

When he wasn’t volunteering for his community, lobbying for council policies, or supporting local events, Chris loved to go camping with his great friends, Mike and Kathy McDowell, the Goodlanders, and his family. He was a great supporter of high school and college athletics, enjoyed long-distance bike rides and listened to his extensive record collection.

A celebration of life will be scheduled at a later date when safe and healthy for all.  In lieu of flowers or gifts, please donate to the Society of Saint Vincent dePaul.

To order memorial trees or send flowers to the family in memory of Christopher Copstead, please visit our flower store.