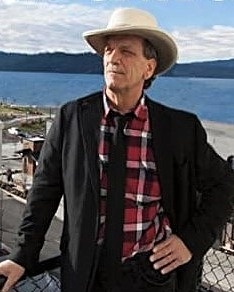 Christopher “Chris” Douglas Guggemos, 68, affectionately known as the community’s “Music Man,” passed away peacefully in his sleep in Coeur d’Alene Monday after a six-year battle with cancer.

For 31 years, Chris and his company, Handshake Productions, provided free summer concerts at local parks, beginning in Coeur d’Alene and later expanding to Hayden and Rathdrum.

Chris’s impact on the Coeur d’Alene area was evident in his last week of life as musicians, community leaders, and friends visited Hospice of North Idaho Schneidmiller House to pay their respects.

Chris was born March 4, 1954, to Bernard and Dolores Guggemos of Lansing, Mich.

He graduated from Central Catholic High School of Lansing and later moved with his wife to Coeur d’Alene, where they owned and operated a restaurant. The couple later divorced. Chris then worked at miscellaneous jobs before persuading Coeur d’Alene parks director Doug Eastwood to help him stage free concerts at City Park. Later, Chris added concerts at Fort Sherman Park Square on Sherman Avenue, Hayden’s McIntire Park and, for a time, in Rathdrum City Park.

Chris formed Handshake Productions to promote the free concerts and other entertainment services he offered. His brother Gary explained the company’s name: “If he couldn’t trust someone by a handshake, he didn’t want to do business with him. His handshake was his word.”

Chris was present at every concert to introduce the band and lead an acapella singing of our national anthem, unless illness prevented him from doing so. Occasionally, he would sing with the band. He played the mandolin, and recorded 11 songs on a CD, called “One Short of a Dozen.” The CD title paid homage to his family of a mother and 10 siblings after his father died.

In 2020, after COVID had taken hold, Chris pushed ahead with his concerts despite the challenge to line up bands and raise money. “Unless the governor or the government at any level makes a decision to the contrary,” he said at the time, “I'm going forward with it. I’ve had no thought of dropping out.”

Chris loved the Gonzaga Bulldogs, pro football, dancing, hearing new bands, and most of all his town.

Chris was the president of the Coeur d’Alene Rotary Club until this past June. Also, he was a member of the Kiwanis Club and the Downtown Business Association. He was a devout Roman Catholic.

Chris, the first of the 10 siblings to pass, was preceded in death by his parents.

Donations can be made to the Hospice of North Idaho Hospice House.

To order memorial trees or send flowers to the family in memory of Christopher Douglas Guggemos, please visit our flower store.