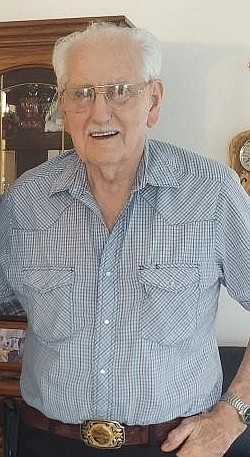 He moved with his parents and two older sisters to Harrison, Idaho, in 1936. They landed at their new home on the very day that his future love and wife of 68 years, Alice Peterson, was born in St. Maries, Idaho. He attended elementary school at East Point and graduated from Harrison High School in 1951. While living in Harrison, the family grew, adding a brother and two sisters.

He met Alice in April 1952 and married on June 13, 1953. He worked in the lumber industry for all of his life in mills throughout the Northwest, starting with Russel & Pugh near Harrison. He was a devoted son, husband and father doing what needed to be done to support his family. He loved “real” country music and dancing — a legacy he passed on to his children. He loved working with his hands: carpentry, lapidary — learning the skill of putting stones to beautiful jewelry, moving on to intarsia, and finally to lathe work. He also loved hunting, fishing and camping. He loved life and was a master storyteller. In his final years he was devoted to caring for his wife.

He is already missed by his family and friends. The family will be holding a private gravesite service at a later date.

To order memorial trees or send flowers to the family in memory of Clifford Claflin, please visit our flower store.
Send a Sympathy Card