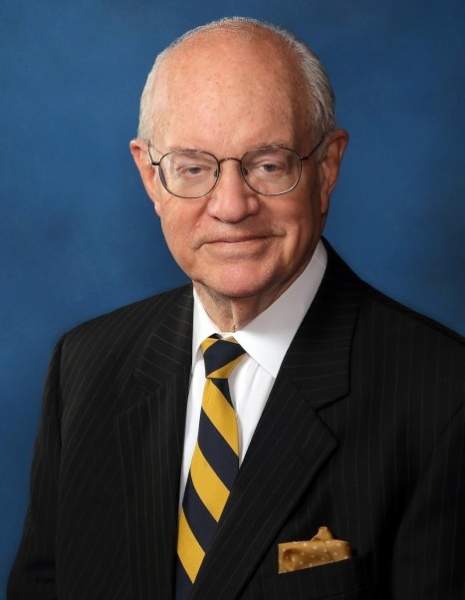 Clifford Donald Allen, Jr., 87, passed away peacefully at his home on the shores of Lake Coeur d’Alene, ID on Monday, January 17 with his wife of 33 years, Sally, by his side.

Born in Oakland, CA in 1934 to Clifford and Marjorie Allen, Don attended Oakland Tech High School and the University of California, Berkeley, graduating in 1957 with a degree in history. Despite contracting polio when he was twelve years old, Don joined the California National Guard and saw brief active duty in the Korean War. An avid reader and an Oakland A’s fanatic, Don loved to shoot skeet and birds (as long as they didn’t fly too fast). He enjoyed good wine, Gonzaga Bulldogs basketball, science fiction, and acting with integrity.

Don epitomized the Rotary slogan “Service Above Self,” and over his lifelong career in banking in the San Francisco Bay Area Don worked without ceasing to better the world. In 1984, in order to create a banking culture fully aligned with his community-based values, Don founded Cupertino National Bank and Trust. He served as the Founding President/CEO and Chairman of the Board for the next twenty years and also as a member of the board of directors of the California Bankers Association for ten years. The bank became a cornerstone of the community, and in 1998 Don was recognized by the City of Cupertino as the Citizen of the Year.

Don served on the boards of dozens of Silicon Valley non-profit organizations and chaired the capital campaigns of even more. He was a mentor to executives across the valley and in his retirement community of Coeur d’Alene. His legacy lives on in every ask and phone call made by the small army of dedicated fundraisers he taught, inspired, and lifted up over the years. Even after entering hospice care, Don was making calls to encourage the Coeur d’Alene Rotary Club Foundation to reach their million dollar capital campaign goal, a goal they reached before his death.

Don was a Rotarian for over 50 years, serving in the Rotary Clubs of Los Altos, San Francisco, downtown San Jose, and Cupertino in California; he continued that service in Coeur d’Alene, Idaho, where he and Sally built their home upon his retirement. He was President of the Rotary Club of Cupertino in 2000-2001, and traveled to Accra, Ghana for Polio Eradication National Immunization Day and Texcoco, Mexico to distribute 240 wheelchairs. In 2003-4, he had the honor of serving as District Governor, Rotary International District 5170.

A recipient of the Silver Beaver award from the Boy Scouts of America, Don was a 32nd degree Mason, Scottish Rite Bodies, for over 50 years and a member of Aahmes Temple, Ancient & Accepted Order Nobles of the Mystic Shrine. He was a Knight Commander of Justice and Prior Emeritus, Priory of the Western United States, of the Sovereign Order of St. John of Jerusalem, Knights Hospitaller.

Witty, warm, and loving, Don leaned into his role as patriarch. He gently and firmly insisted his many children and grandchildren explore their full potential as human beings. He believed that hard work and life-long learning were twin pillars of a successful life and he instilled those values in his family. A proud grandfather, Don donated to the Rotary Foundation in the names of all his grandchildren, racing his Rotary friends to turn the births of their grandchildren into acts of fundraising prowess.

It is impossible to overstate the impact Don had on not just his family, but the communities he called home. Though he could have boasted about his political connections, executive positions, and memberships in exclusive clubs, that wasn’t Don’s style. He was humble, honest, and self-effacing, always using the social capital he earned for the betterment of others. Dependable, helpful, and eternally optimistic, Don brought joy and laughter to the serious business of making the world a better place. He will be deeply missed.

To order memorial trees or send flowers to the family in memory of Clifford "Don" Allen Jr., please visit our flower store.