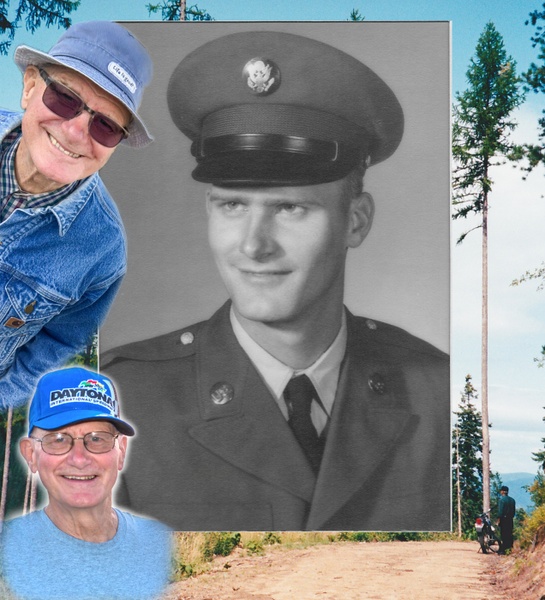 Darrel passed away peacefully on October 24, 2020, at the Schneidmiller Hospice House in Coeur d’Alene, Idaho with his loving wife by his side. With one last tender squeeze to her hand, he went to the outstretched arms of his Savior.

Darrel was born on November 15, 1938, to Rudolph Erick Carlson and Annie Henrike Cordes Carlson in Warren, Minnesota. After having lived in Mount Vernon, Washington for a few years, they raised their family and made their life in Osburn, Idaho. Darrel began his education at Osburn Elementary, attending through the 8th grade.  He continued his education at Kellogg High School until his sophomore year, then transferred to Wallace High School where he graduated with the class of 1957.

Darrel was 13 years old when his father passed away. He started working to financially help his mother. He was a devoted son, who later became a devoted husband and father. He was a dedicated helper to others, whether they had two or four legs, continuing generously for as long as he was able.

At age 15, Darrel began working at Safeway.  He was drafted and served in the US Army from 1961 to 1963 (active in the reserves thereafter).  Darrel then picked up where he had left off and went back to work at Safeway. He worked as a produce man with Safeway until 1974.   After Safeway, Darrel worked for Continental Baking for a little over a year, ordering and delivering Wonder Bread/Hostess products (much to the delight of his children) before he found his happy place working underground. Many would think Darrel a quiet man until you got him started on stories of working in the mines (or talking about cars). He started his underground career at the Star mine and retired from the Galena mine in 2004 at the age of 65. He enjoyed many years working underground, but once again had to spend some work life above ground during the times of mine closures. Those detours led to working at the Exxon Station in Wallace, where he enjoyed his coworkers and regular customers were always happy to see him.

Darrel was united in marriage to Joann Darlene Leischner on her 18th birthday, August 15, 1964, at Our Savior Lutheran Church in Pinehurst, Idaho. They lived in Pinehurst until January 1965 when they moved into their first Osburn home. In the following year, their daughter, Lori was born and was forever one of her daddy’s favorite blessings. In 1969, on Darrel’s birthday, they completed their family by bringing home their son, Bruce, whom they formally adopted in 1970 when Bruce was four years old.

Darrel loved his family and extended family. He instilled in his children his love for his Heavenly Father. He also shared his love of the outdoors. Whether it be hiking, fishing, hunting, walking the dog or just taking in the sound of birds or a clear running mountain stream. He also shared his love for working on cars. Before he was married, he enjoyed racing his 1959 Chevy Impala at Deer Park Raceway. Then when he became a Dad, he enjoyed taking his baby daughter out for a ride as a sure way to help her fall asleep. He spent Sundays with church, NASCAR and football, liked reading the newspapers cover to cover and would often read the comics out loud to share the laughs. But even more special were the sweet notes he would write above the headlines for his family to find. His love of reading definitely carried over to books and he read many a western and Clive Cussler.

Darrel is survived by his loving wife of 56 years, Joann Carlson. Also, by his daughter Lori Carlson and her husband Michael Ellis; his brothers Ronnie Carlson (Bonnie) and Roger Trumbull (Donna); sister-in-law Bernadine Carlson and granddaughter Jada Margaret Ann Carlson. He is also survived by many nieces and nephews, bonus children and grandchildren who loved him very much.

A Memorial/Celebration of Life will be held at a later date.  English Funeral Chapel has been entrusted with Darrel's cremation and his Tribute Wall is available on the English Funeral Chapel website, www.englishfuneralchapel.com.  Memorial donations may be made in Darrel’s memory to Peace Lutheran Church, Samaritan Fund, 8134 N Meyer Rd, Post Falls, ID 83854 or Newby-ginnings of North Idaho, 570 Clearwater Loop A, Post Falls, ID 83854.

To order memorial trees or send flowers to the family in memory of Darrel Carlson, please visit our flower store.