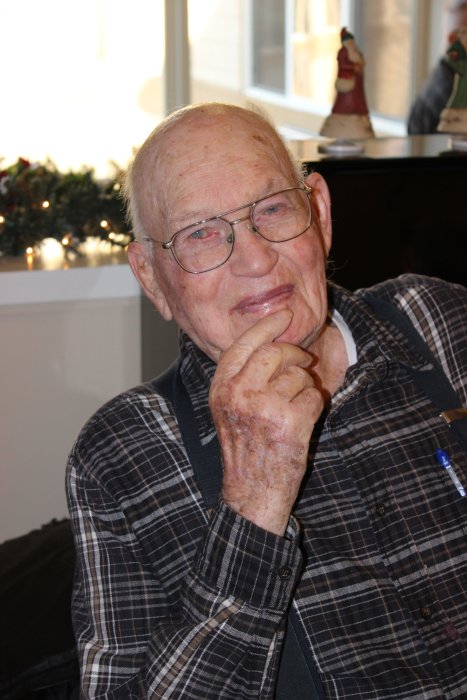 Ed’s grandparents immigrated from Sweden before the turn of the century and lived on a homestead farm near Coeur d’Alene. He spent many happy days with them while on school vacation. Ed had early memories of riding the horse and buggy with his grandmother while delivering milk. He also recalls the American Indians from Worley camping at Cougar Bay and bartering with his grandpa for oat hay for the horses and cream for themselves in exchange for huckleberries.

Ed finished school through the eighth grade in Rose Lake. He attended Coeur d’Alene High School while living in Cougar Bay, so he walked 2-and-a-half miles to school every day. The first job Ed had after high school was for a logger on Cedar Mountain, near Silverwood. It took him five hours by horse and wagon to travel the 20 miles to the camp.

Ed attended North Idaho College and then graduated from the University of Idaho. He received his Master’s degree in 1939. He served in the US Army Air Forces from 1941-1945, being stationed with the Alaska-Siberia Air Route for 2-and-a-half years. This was not considered hazardous warfare, but was an active base with planes being sent to the Russian front. Before and after the war, he worked for the Department of Health and Welfare from 1940-1976 in Sandpoint, Grangeville, Boise and Coeur d’Alene.

Ed married May L. Mathison on July 8, 1951. Ed was married to his wife for 47 years. Ed and May enjoyed traveling together and even visited Norway and Sweden, where they had relatives. May passed away in 1998. Ed is survived by his brother Raymond Johnson, son Douglas Johnson, and three grandchildren, Analisa Gifford, Melissa Schlundt, and Erick Johnson.  He was preceded in death by his brothers, Clare, Floyd, Lawrence, and sister Myrtle Burnett.

Ed enjoyed gardening (especially growing strawberries, raspberries and apples), fishing, reading, and huckleberry picking. He was interested in politics and was president of the Chapter of the National Council of Senior Citizens, Coeur d’Alene Wildlife Federation, and member of the Kootenai Environmental Alliance.

A memorial service will be held on Tuesday, May 28 at 11:30 am at Trinity Lutheran Church, 812 N. 5th St., Coeur d’Alene followed by a luncheon in the church hall.

To order memorial trees or send flowers to the family in memory of Edward Johnson, please visit our flower store.