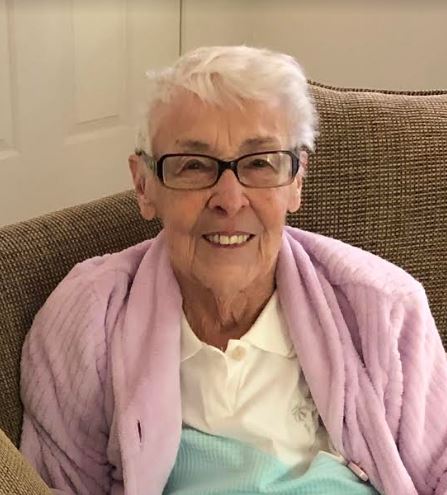 Estelle was born May 31, 1932 in Winthrop, Massachusetts to Charles and Irene Lavoix. After growing up in Winthrop and graduating from High School in 1950, Estelle went on to study at Faulkner Hospital in Boston, MA, to become a Registered Nurse.

The United States Air Force was a new and exciting branch of U.S. Military in 1947. Like many young men and women of that era, Estelle had that same passion to join, and honorably served as a Lieutenant Nurse from 1954-1956 at Fairchild AFB near Spokane, WA. Estelle was a proud and faithful Air Force Veteran and a member of The American Legion for over 40 years.

After her service in the Air Force, Estelle studied at Gonzaga University in Spokane, WA for two years and then completed her Bachelors of Science degree in Nursing at Seattle University in 1959. From there she continued her career as a Registered Nurse.

Estelle met Harold (Harry) Johnson, a Diesel Mechanic, in 1958, at The Chancellor Club, a singles club for young Catholics in Seattle, WA. They were married on December 22, 1962. They raised their two sons, Stephen John Johnson and David Scott Johnson in Issaquah, WA, where they lived for 31 years.

In 1993, Harry and Estelle moved to Ione, WA, and built their retirement home on the Pend Oreille River in 1995. After Harry’s passing in 2003, Estelle spent time between Ione WA., Henderson NV, and finally settling in Coeur d’Alene, ID, in 2014.

Estelle always loved the bright lights of Las Vegas where she would spend time at her second home in Henderson, NV, with her son David. Estelle would visit the Casinos, play her favorite slot machine ‘Wheel of Fortune’, and enjoyed her favorite Seafood buffets and Chinese food.

Estelle is survived by her son Stephen and wife Stacy Johnson of Ione, WA, and their three children Charles, Samantha, and Nathan; son David Johnson of Henderson, NV, Sister Lorraine Zielinski of Port Hueneme, CA as well as many Nieces and Nephews.

Estelle was a loving Wife, Mother, Grandmother, and Aunt. She enjoyed nature, and was surrounded by birds, deer, and squirrels at her retirement home on the Pend Oreille River which she loved.

Her life was full of service, love, generosity and kindness. Estelle will forever be in our hearts and greatly missed.

To order memorial trees or send flowers to the family in memory of Estelle Marie Johnson, please visit our flower store.
Send a Sympathy Card