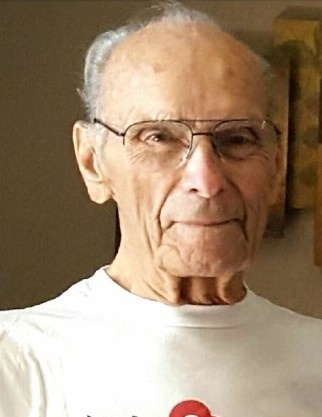 Eugene Carl “Gene” Miller, 94, passed away peacefully at his home on December 22, 2020, one week after his 94th birthday.  Gene was born on December 15, 1926, in East Alton, Illinois to George and Mary Eleanor (Havelka) Miller.  Preceded in death by both of his parents and his older brother Joe Miller and his younger sister Ruth Prather.
After graduating from high school, Gene joined the navy and served his country during the Second World War.  He was stationed in Japan post-war.  He was honorably discharged after his service.
Gene could tackle any problem or project.  He was a jack of all trades and master of them all.  His work re-defined the adage if it is worth doing it is worth doing perfectly.
He was an airplane mechanic and could take a DC-6 apart and put it back together. He wrote a manual for the DC-6 for an air-freight airline in Alaska.  He later became the station manager for KLM Airlines in Anchorage and retired in 1989.  After he retired Gene spent hours on projects of all kinds, but his favorites were growing tomatoes and shooting trap at the Coeur d’ Alene Gun Club.
Gene Lived in many locations throughout the US and loved them all, except New York City.  He enjoyed traveling and visited several other countries and many places in the US.  He especially loved Kona, Hawaii.
Gene enjoyed hunting and fishing, which lead him to a 30-year adventure in Anchorage, Alaska.
Married Margaret Ventress (divorced) and is survived by their daughter Mary Margaret Miller of St. Charles, MO.
Married Micki (Mounts) Skousen (divorced) and he helped raise her two boys, John Skousen, and Russ Skousen.  Gene is survived by two of his three children with Micki, daughter Andrea Jeanne (Jason Loucel), and son Eugene C. Miller, Jr. (Kari).  Predeceased by Christina Ellen Miller in 1978.  He is also survived by 14 grandchildren and 31 great-grandchildren.
Survived by his loving and devoted wife of 47½ years, Terry (Coppedge), and her two sons, Tom Hansen (Raeanne) and Tony Weydahl (Ammy).

To order memorial trees or send flowers to the family in memory of Eugene Miller, please visit our flower store.