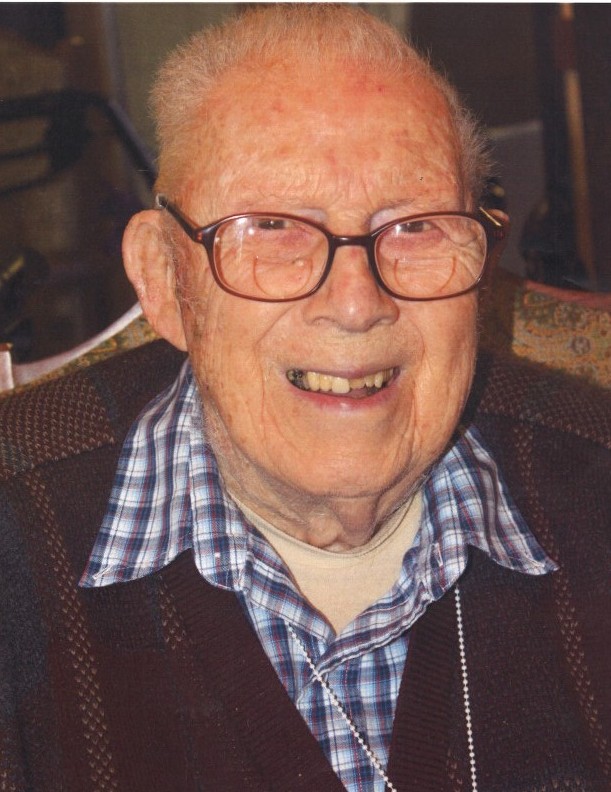 Frederic Eugene Mitchell Sr. (97) passed away peacefully on November 20, 2020, at the Garden at Orchard Ridge in Coeur d’Alene, Idaho. He was born on April 15, 1923, in Cincinnati, Ohio to Clarence and Edna Mitchell. Clarence was a Baptist minister serving at the Federated Church in Brookston, Indiana.

Fred grew up in Brookston, Indiana. He graduated from Brookston High School in 1941. After high school, Fred attended Purdue University in West Lafayette, Indiana for 2 years until May of 1942 when he was inducted into the U.S. Army. He transferred to the Army Air Corp where he attended the Army Air Forces Navigation School. Fred graduated from Navigation School in September of 1944. In January of 1945, he was deployed to England as a Navigator in the nose of a B-17G assigned to the 8th Air Force, 731st Wing 452nd Bomb Group in support of WWII. Fred served five months in England where he navigated 30 combat bombing missions over Germany.

After coming back to the United States in June of 1945, Fred was stationed at Sioux Falls, South Dakota which is where he met his future wife Nathalie D. Lunden. He was temporarily assigned to Walla Walla, Washington awaiting to be accepted into pilot training. After five months of courtship, Fred decided it was time to settle down and so he married Nathalie on November 30, 1945.

Fred remained in the Air Force for the next 18 years where he completed pilot training and weather forecasting. Nathalie and Fred moved 15 times to different Air Force bases in the United States, Philippines, and England adding three sons, David, Fred Jr., and Eddie, along the way. He retired from the Air Force in November of 1963 stationed at Malmstrom AFB, MT with 21 years of service achieving the rank of Major. He flew a total of 5,200 hours, 650 as Navigator, and the remaining hours as a pilot.

After retiring from the service, Fred completed his B.S. degree in Education, majoring in Mathematics from the College of Great Falls in Great Falls, Montana. He accepted a mathematics teaching position at the Coeur d’Alene Junior High School in Coeur d’Alene, Idaho. Fred taught algebra for four years while earning a Master's degree in Education from Whitworth College in Spokane, Washington. The next seven years he taught Geometry and Algebra II at Coeur d’Alene High School located on 15th St. and E. Hastings Ave. When the new High School on 4th St. and Dalton Ave. was completed in 1969, Fred taught Trigonometry, Probability, and Statistics for the next ten years. He retired from the teaching profession in 1985 after 21 years of service. During his teaching career, Fred served as president, finance committee member, and chairperson of the Idaho Education Association. As chairperson, he was recognized by receiving the Idaho Education Association's most coveted award “Friend of Education”.

Fred did not like to sit around and do nothing and so he spent the next 25 years as an active church member. He maintained the church building and grounds, was a tax aid with the AARP Tax Program, a mentor for high school students who needed help in math and a program and agenda preparer for the Retired Education Association of North Idaho.

Fred and Nathalie were happily married for 71 years providing a Christian home for their three sons. They were always involved in various church activities and helped out where needed. They enjoyed traveling abroad or visiting relatives and Air Force friends across the United States. Fred especially enjoyed putting up lots of Christmas decorations outside their apartment at Lake Tower downtown Coeur d’Alene. He won the Hagadone lighting contest several years.

Fred was preceded in death by his parents Clarence and Edna Mitchell and his wife Nathalie.

He is survived by sons David (Charlene) of Memphis, Tennessee, Fred Jr. (Mary) of Fuquay-Varina, North Carolina, and Edward of Coeur d’Alene, Idaho; a sister Betty Goss of Indianapolis, Indiana; grandsons Jeff, Jeremy, Christopher, and Fred III; his great-grandchildren Ivy, Nolan, and Leona; and other relatives.

The family request memorial donations be made to Peace Lutheran Church, Hospice of North Idaho, and The Garden at Orchard Ridge.

Your browser does not support this video format. You should be able to view it in Chrome, Safari or Internet Explorer.

Your browser does not support this video format. You should be able to view it in Chrome, Safari or Internet Explorer.
To order memorial trees or send flowers to the family in memory of Frederic Mitchell, Sr., please visit our flower store.