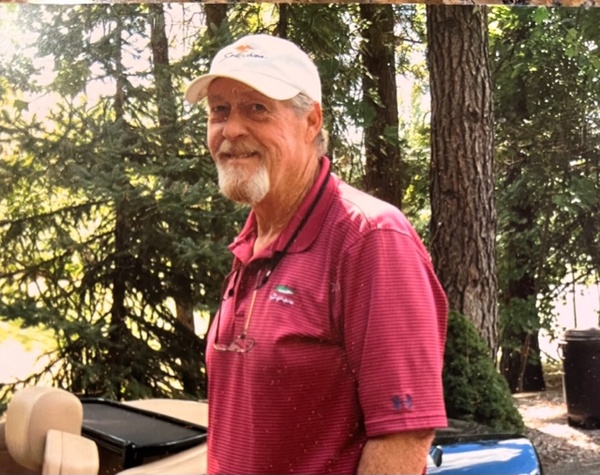 With tender hearts, we announce the passing of our beloved husband, father and grandfather, Garry Keith Benson, age 76, of Coeur d Alene Idaho on April 14, 2022.  Garry, or lovingly referred to as “G”, came into this world in Klamath Falls, Oregon to his mother, Francis Alberta and his father, Porter Silas on September 25, 1945.

Born in the rural part of the state, he grew up with a love of the outdoors, and found more reasons to play cowboys and indians with the neighborhood boys than he cared to be in school.  However, stricken with polio when he was only 8 years old, he spent a year recovering, which forced him to be out of school and depriving him of precious childhood activities.   Soon after, Garry’s father would become ill, and his Uncle Elmer stood in to care for the family, bringing with him new hobbies like duck hunting which would become great stories he would go onto share throughout his life.

When he was old enough to play organized sports, Garry adopted a love for the game of baseball, beginning with the Pee Wee league and would go on to find his place in the American Legion club.   Excelling at that, he was scouted and went on to play in the Chicago Cubs minor leagues as a relief pitcher from 1966 thru 1970 with an ERA of 4.28.  He was known for his submarine pitch, which was hard to track due to the movement of the ball from the delivery.  Crossing paths with some of the greats in the Cubs ball club he once stood in the batter’s box with Sandy Koufax, and pilfered a jersey belonging to Ernie Banks. He was a hometown legend deserving of articles written about his successes in the local and state newspapers.

Further into adulthood, Garry began an award-winning career in the office equipment industry as a Sales Executive and spent over 40 years developing his own style of rapport-building, with wit and simplicity.  It was during the early part of his career when he met his first wife, Karen and started their family with daughter Alexandra (or Alley) in the Portland, Oregon area in 1989.  Garry’s understated but cunning ability to disarm any prospect with his humor and folksy approach made him a  formidable opponent in the world of sales.  Able to talk an Eskimo into buying ice, he invoked a super-power of personal persuasion. And getting to “yes” was the ultimate game of chess, already knowing every move in his head in the first 30 seconds of meeting his customer. It didn’t matter their position, their station in life nor their level of interest, they would be humored and unwittingly agreeable before he walked out the door.  Not everyone deserved his good nature, and when he was wronged or mis-treated he never hesitated to growl or bark. But one really had to deserve it to be on the receiving end of his wrath.

In 2002, Garry was reunited with a former co-worker, Marianne, after more than 10 years, by a mutual friend. As if no time had separated them, they rekindled their relationship and were married in 2003 and moved to Idaho in 2004.  They settled into an inviting, lodge-style home on the third fairway of the Coeur d’Alene golf course where they would host many friends and family for the next 18 years at the “Hotel Benson.”

One of the true loves of his life was the game of golf. To know him, was to know this.  He was serious about his work but he always found the fun, and the “funny” in his work and life. Never at someone else’s expense (okay, maybe occasionally) but usually at his own, with a self-deprecating story and an unexpected ending. Garry loved to compete and had high expectations for his abilities at work and at play. This competitiveness was present, if understated, in every activity. He tried to be the best fair and square.  And, he played many courses over the years, in the US and abroad, yet his most memorable game took place in Ireland due to the amazing skill of the caddy and the rugged course.

How he approached the game of golf was very much how he lived his life – to make it fun for everyone, to observe his fellow players and only advised if asked, to be encouraging and supportive, leaving people feeling better for having met him.

He was a dedicated and protective father. There was no greater treasure than his baby girl. A family man, who enjoyed being with them, and taking in the conversations around him.  As a friend, he was loyal, steady and reliable maintaining many friendships from his childhood.

A masterful storyteller, Garry was, in so many subtle ways a teacher of life …questions he asked would lead you to an answer, or reveal a direction or perhaps change your view.  He loved to talk about his dog Smokie who he had when he was growing up, about his fiercely proud and highly-spirited Mother, the trouble he got into with his friends, the friendships he had that were 60 years old, the baseball games, and the golf games, the sales he closed and all the best and worst people he worked for and with, his frustration with technology, his love and appreciation for native American customs and the beautiful lands he came from.  Around any mountain or river, Garry was his most genuine, authentic self.  But being at Glacier National Park was the place that profoundly moved him, as if he were home, and at peace.  …..And now he is that…and he is free to roam there, and all of the universe.

A memorial service will be held Saturday, May 7th at 2 pm at English Funeral Chapel, 1133 N Fourth St, Coeur d’Alene, ID  83815. Family and friends are welcome to attend.

To order memorial trees or send flowers to the family in memory of Garry Keith Benson, please visit our flower store.