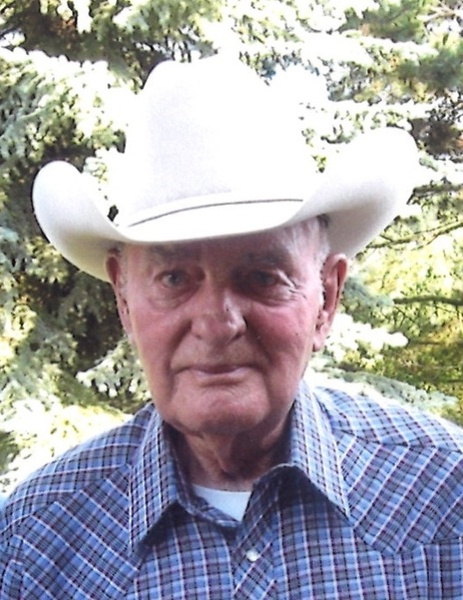 Gordon W. Eggart passed away on February 10th, 2021 he was 98 years old. Gordon was born on July 15th 1922 in Lewiston Idaho. The second child of Jesse and Violet (Brunner) Eggart. The family later moved to the Hauser Lake area and Post Falls where he attended school. He said he had a good life growing up with older brother Ronald, and Warren and "sis" Kathryn.

He came to love the outdoors and working with horses and cattle which lead to a long life of ranching and a Livestock Dealer. He  enjoyed coffee with friends while doing business in "North Idaho" between Lewiston, St Maries, Rose Lake up to Priest River.

Gordon was drafted into the Army in Dec. 1942. He was trained as a Combat Engineer in Texas and AZ area and then sent to Europe by way of Omaha Beach to Berlin. He also took part in The Battle of the Bulge. After being discharged in October of 1945 he returned to North Idaho. Starting a small trucking business hauling equipment and also working for a local rancher & farming in Post Falls. He took pride in his service to our country during WWII.

Starting his own ranch on the Rimrock where he raised a family with his wife Lois (Seiter) Eggart. Gordon and Lois had four children, Marie, Richard, Jerry & Larry. We all loved ranching and living on the Rimrock with many cousins and friends visiting and riding horses.

Gordon loved the country life. Riding the mountains and checking cattle with daughter Marie at his side. He enjoyed buying and selling cows and horses, visiting friends and drinking lots of coffee. People would see his truck all over the northwest from Lewiston to Priest River western MT and eastern WA. One of his favorite places to run cattle was south of Lewiston on the Snake River.

Gordon is survived by his sons Jerry of North Pole, AK and Larry (Darlene) of Nome, AK. with five grandchildren - Christina, Jared, Shannan, Stephanie and Richard. Four great grandchildren and many nephews and nieces.

The family would like to thank Dad's neighbors for their friendship and help, especially Karen who went out of her way to befriend and care for him, cooking and as he was fond of saying, "detailing his home". He had good friends and neighbors in the Priest River area who stopped in to check on him, enjoy a cup of coffee, a slice of pie, or brownies. Thank you for all the brownies and pies they made for he really enjoyed them.

Funeral services are planned for February 23 at 1PM. at the River of Life Friends Church in Post Fall, ID.

We would like to plan a Celebration of Life in Priest River at a later time.

To order memorial trees or send flowers to the family in memory of Gordon Eggart, please visit our flower store.