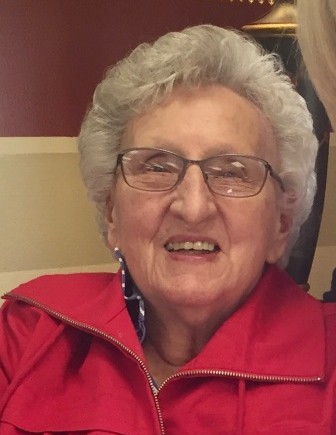 Hazelle was born December 24, 1928 in Bowman, North Dakota to Jack and Ellen Idler. Hazelle was their only child raised on a farm in Rhame, North Dakota. Hazelle met and became engaged to the love of her life, Ernest J. Hendrickson. They married on September 6, 1946 in Miles City, Montana. They were married for 67 wonderful years.

They moved to Kelso, WA in 1946 where Ernie worked in a lumber mill. In 1947, They moved to Ellensburg. Ernie took a job farming, which he knew well from his youth. A few years later they bought a 200 acre farm in the Badger Pocket area of Kittitas County, WA. There they raised many cattle and sheep, hay, alfalfa, potatoes and corn. More importantly, they raised their three sons and one daughter and taught them all to work hard and do right. Hazelle had a very strong work ethic. Hazelle worked at the Valley Clinic and many years in the banking business. At her retirement she was Manager of US Bank. Hazelle retired in 1991.

When the kids had grown, Hazelle and Ernie moved to a smaller piece of land in Naneum just outside Ellensburg. When they retired Hazelle and Ernie learned to love golf and spent much of their free time playing. Later they moved to Desert Aire, where they could drive their cart to the golf course and made a lot of friends. Many fond memories were made there golfing with their kids and grandkids. They bought a fifth wheel and enjoyed the life of snowbirds spending the cold northern winters in sunny Yuma, Arizona. After Desert Aire they moved back to Ellensburg and then finally to Coeur d'Alene, Idaho near their daughter, Teresa.

Kids and grandkids share wonderful memories of Sunday dinners and family holiday gatherings with Hazelle making farm-sized feasts and Ernie patiently teaching the grandkids his favorite card games, Pinochle and Cribbage. Of course, Hazelle was always the best card player and loved cards up until the end.

Hazelle is preceded in death by her beloved husband "Ernie" of 67 years. Grandchildren Lynsey Hendrickson, Michael Hendrickson and Jeff Sandnes. Hazelle is very much loved and will be greatly missed by her family as well as her many friends.

A celebration of her life will be announced and held in Ellensburg in the Spring.

Note: When we got the call that mom had passed, a song came to mind…

Think about a car flying down the road leaving the Badger Pocket, might have been a Dodge or Chevy. Dad, Mom, and Teresa in the front seat and three wild boys in the back seat, everyone singing; "Mairzy doats and dozy doats and liddle lamzy divey. A kiddily divey too, wouldn't you?"

To order memorial trees or send flowers to the family in memory of Hazelle Hendrickson, please visit our flower store.
Send a Sympathy Card