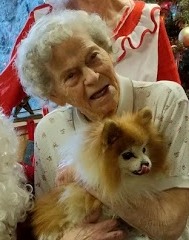 Helen M. Hansen, age 100, died April 26, 2021 at Ivy Court, in Coeur d’Alene, Idaho.   Helen was born December 2, 1920 in Ferdinand, Idaho to Melvin and Elsie (Beck) Thostenson.   She Joined the U.S. Army and was the first and only base drummer in the Ladies Army Band.    Helen was an accountant the U.S. Army until her retirement from the military.   She married William (Bill) Hansen on December 2, 1944 in Santa Rosa, California.   While in California, they lived in several cities including Santa Rosa, San Luis Obispo and Oxnard.    Helen also helped her husband Bill with care taking duties at the English Funeral Chapel, Coeur d’Alene and later at the Huston Funeral Home in Lebanon, Oregon.   She and Bill enjoyed traveling by car, they would take off and drive many miles with no real destination in mind.

Helen was preceded in death by her husband Bill on April 5, 2011.   She is survived by her son Mike and his family.

Helen’s family would like to extend an invitation to her friends and family to attend her Military Honors on May 18th (Tuesday) at 11:00 am at Riverview Cemetery in Coeur d’Alene.

To order memorial trees or send flowers to the family in memory of Helen Hansen, please visit our flower store.
Send a Sympathy Card