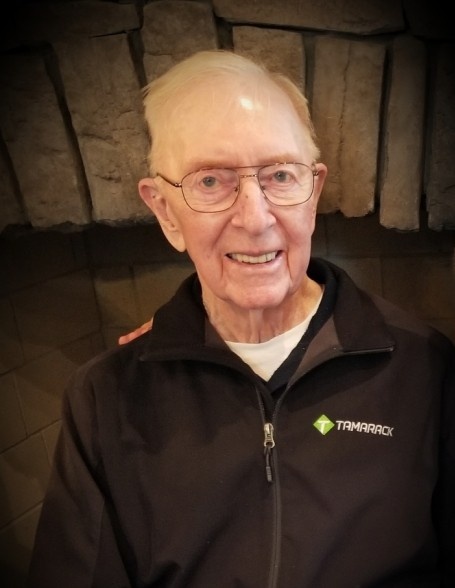 Jim Davidson, the red-headed son of a pioneer family left us on June 21, 2021 at the age of 97. Born in Gresham, Oregon, James and his brother Bob were raised during difficult times by his hardworking, widowed mother Lucy. WWII interrupted his college years when he joined the Navy as an officer candidate. Training at Harvard, he was taken with a beautiful Irish girl named Lorraine. Despite their incredibly different backgrounds they fell in love and married. It would be a powerful bond that defined the rest of their lives.

After the war the couple had a son, and soon relocated from Boston to Portland to pursue new opportunities. Jim found himself in the insurance industry, a career in which he excelled and stayed with until retirement. A second son and daughter followed and they eventually made their life in the Seattle area, before retiring to Vancouver, Washington.

Above all, Jim was a family man. His single-minded dedication to providing for their best life was evident in everything he did. To his wife he was a true provider and there through thick and thin. To his children he was the model of integrity, teaching honesty, hard work and responsibility.

At the end of his life, Jim was ready to leave and anxious to join Lorraine and son Kenneth, who he lost some years before. Surviving are his two remaining children, Scot Davidson of Sisters, Oregon and Lynn Dever of De Smet, ID, along with four grown grandchildren

Commander Davidson will be interned with Lorraine at Willamette National Cemetery in Portland, Oregon. This good man will be missed.

To order memorial trees or send flowers to the family in memory of James Davidson, please visit our flower store.
Send a Sympathy Card