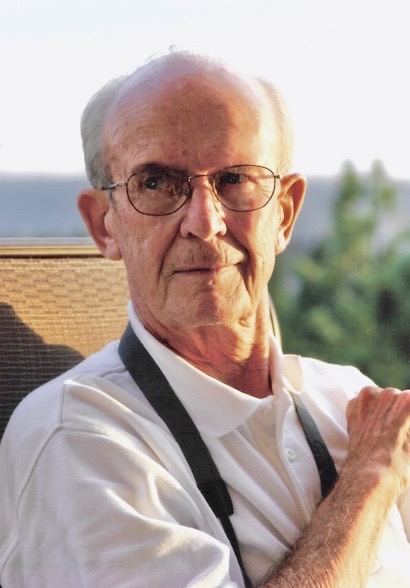 He was born August 30, 1926, in Chicago, IL, son of James W. Love, Sr. and Florence Pixley Love.  The family moved to Glen Ellyn, IL in 1928, where James (better known as Jim) grew up, graduating from Glenbard High School in 1944.  He received a BS in Mechanical Engineering from Purdue University in 1949, his college attendance interrupted by service as an Aviation Electronics Technician’s Mate in the U.S. Navy, 1945-46.

In 1950, Jim married Sally Connell, whom he met at Purdue, and they had three children:  Jeffrey, 1952; Kathryn, 1954; and David, 1958.  The family lived in a variety of places around the country, including WI, CA, PA, and CT, as Jim and Sally raised their family and he built a career in the packaging business, first with Marathon Corporation, and then American Can Company, eventually rising to the position of Division Vice-President for Manufacturing.  He left American Can in 1982 and finished his career as President of Austill Packaging in Jacksonville, FL, where he retired.  His wife Sally died suddenly in 1999, the 49th year of their marriage.  Jim then married Frances Williams, a high school classmate, in 2000.  They resided in San Jose, CA, where Frances had lived for many years, until their move to Post Falls in 2016 so they could be closer to his daughter, Kathryn, and her son, John.

In his youth, Jim was a YMCA Camp Counselor, as well as the youngest  Eagle Scout at that time in the state of Illinois.  He was a standout high school student-athlete, excelling at football, basketball, and track, as well as academics, graduating Salutatorian of his class.  In college, he played a year of football, was a member of Sigma Alpha Epsilon fraternity, and a Vice-President of the Student Union.

Jim was active in community and business organizations, serving at various times as a Lions Club President, member of the Board of Directors for a chapter of the United Way, a board member for Marine National Bank, and President of the Gravure Technical Association.  He was a reverent member of the Presbyterian Church, attending various congregations from 1951-2000.  He became an Ordained  Elder in 1963 and chaired various committees at both state and national assemblies of the church.

He was a skilled skier and golfer, both of which he pursued avidly, while always taking care to include his family and teach these skills to his children.  He was justifiably proud of making three holes in one on the same hole at his home course in three consecutive years.  Jim also loved to travel; in his later years with Frances, he made numerous trips to Hawaii, a trip to Alaska, and trips to many foreign destinations, including Germany, Switzerland, Greece, Turkey, Italy, Russia, Egypt, and Costa Rica.

To those who knew him, Jim was a loving, devoted husband and father, a beloved grandfather, a jovial and steadfast friend.  He could be the life of the party with his dry, quick wit, but he was always ready to engage in deep, analytical conversations about politics, religion, sports, or whatever topic might pique his interest.  Notably, his keen intellect remained intact throughout his life.  He displayed unyielding determination and perseverance, along with a commitment to excellence, traits he passed on to both his children and grandchildren.  He possessed great courage, which he relied heavily upon in his later years, living through the last stage of his life with grace, dignity, and humor.  He will be deeply missed.

Jim is survived by his wife Frances Love of Post Falls, sons Jeffrey and his wife Kathleen of Truro, MA, and David and his wife Rose of Huntington, NY., and daughter Kathy Friedlander and her husband Rick of Spokane, WA; five grandchildren, Andrew, Thomas, and Betsy Friedlander, Jeffrey Love and Kait (Love) Brass; and seven great-grandchildren.  In addition to his first wife, Sally, he was predeceased in death by his sister, Pat Holloway.

A memorial service will be held at a later date in Jacksonville, FL

To order memorial trees or send flowers to the family in memory of James Love, please visit our flower store.
Send a Sympathy Card