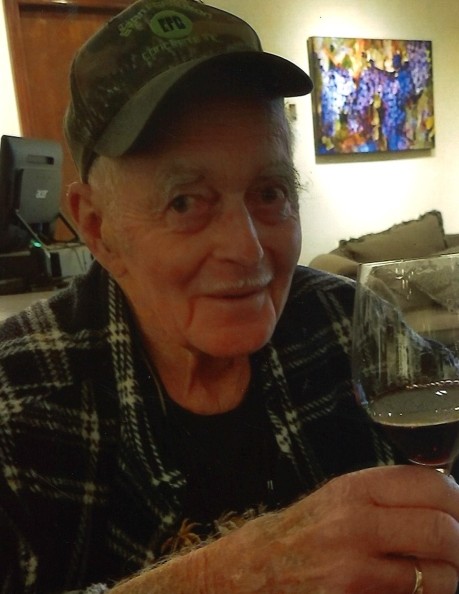 James E. “Jerky Jim” Gaboury departed to check the smokehouse on the other side on Dec. 19, 2021. His demise was contributed to by complications of old age and respiratory and heart failure.

Jim was born on a frosty Feb. 22 morn in 1930 to Laura (Phillips) Gaboury and Edward Gaboury, at the Connolly Hospital in Harrison, Idaho. Since Harrison had no resident doctor, Dr. Platt — the physician in St. Maries — had to be called to travel over snowy gravel roads to assist with the festivities.

Jim spent his childhood in Harrison, attended school and graduated from Harrison High School and later graduated from the University of Idaho in 1957 with a B.S. degree in marketing. In 1956 Jim and Gerda Prescott were married in Coeur d’Alene, Idaho, Gerda’s son, Ellis, joined them and thereafter raised five children who all survive him. They are Ellis Prescott, Debbie Miller (Breck Samuelson), Michael (Lori Kaye) Gaboury, Edward Gaboury and Rosie Folk. He is also survived by his companion friend and soul mate, Jackie Krause, along with 10 grandchildren, 10 great-grandchildren, two nieces and numerous cousins. He was preceded in death by his parents, Laura and Ed Gaboury, and a younger brother, William J. Gaboury.

Jim started his working career at an early age in Harrison, at 7 years of age, by contracting with townspeople and merchants to chop wood and fill their wood boxes after school in winter time for a grand total of $.10, except for Cleveland’s Restaurant that cooked meals on a large wood range, this cost $.25 (big wood box). In 1939 the Gabourys moved to the Big Eddy area of the St. Joe River where Ed and brother Frank unloaded logs from rail cars into the river.

Jim spent school time living with Grandma Phillips in Harrison and the summer on the river. The logs had to be brailed (positioned in long narrow booms) before towing by tugboat down the river, so Jim helped with that process. One problem, he spent more time falling off the slippery logs and into the river than he did on top. So Dad purchased a pair of J.C. Penney leather soled loafers, installed metal spikes (calks) in them, and now we have a 9-year-old lumberjack (River Pig), as it were, probably the youngest in existence. With the calk shoes, Jim became quite proficient at walking on and birling logs.

In his high school years he held various jobs; grocery clerk and delivery boy for Gruiner’s Grocery and Cope’s Mercantile, peeled logs for Connally & Kroastch Stull Company, worked on the sawmill pond and small tug operator for Russell & Pugh Lumber Co. at Springston, Idaho, until a gasoline explosion on the tug in 1948, sent him to the hospital for 18 days, with first, second and third-degree burns. Then a short time as a hooker on a log jammer at a logging operation in the woods near St. Maries, until he was injured.

In 1950 he began working for Lafferty Transportation Company as a lineman on a tug of which his father was Captain. Here with the new calk boots, he learned to walk the tow line between the tug and the log tow and also challenged his father to log birling (a lost cause) this until he was drafted in 1951 into the Army and served two years in the Military Police Corps. After the Army stint, on to the University of Idaho for four years and working summers on the tugboat.

Upon graduating in 1957, he moved with wife Gerda, to Kettle Falls, Wash., where he was appointed port agent for the Lafferty Tug and Barge line. This for 10 years and moonlighting on weekends as a bartender at Freddie’s Café. In 1967 Lafferty Transportation was sold to a Portland, Ore., tugboat firm with (Jim’s assessment) a young upstart manager. Not wanting to work for someone younger than himself, he resigned from Lafferty and began managing Freddie’s Café and Lounge. After four years, and Freddie desiring to retire, Jim was offered the option of purchasing the business. Not desiring this as lifetime career, he declined. Freddie’s was them sold to a Swiss gentleman from the Virgin Islands who tried to change the Café to a gourmet extravaganza instead of the Kettle Falls cowboy-logger, good time atmosphere. Not liking this, Jim exited Freddie’s and spent the first summer on the Outhouse Maintenance Crew for the National Park Service on Lake Roosevelt.

When the summer was over, he was hired as a log scaler for Boise Cascade Corporation in Kettle Falls. After a year of learning the ropes of log scaling, he was offered a position of log scaler in Coeur d’Alene for Idaho Forest Industries. So Jim gathered up wife Gerda, five children and two smokehouses and moved to Dalton Gardens. He worked for Idaho Forest Industries for 19 years, gaining the position of Check Scaler and log yard supervisor, all the while maintaining his hobby of smoking fish and jerky, then retiring and being divorced by Gerda in 1991.

During retirement Jim stayed busy by volunteering at the local food bank and Kroc Center, hunting, fishing, gambling (many trips to Reno and Las Vegas) and traveling in the United States and with numerous cruises to the Caribbean Sea, Panama Canal, Alaska and Mexico, tending to a large garden, especially his “Poppy Patch” and beloved long stem gladiolas, and still managing to operate the smokehouse for his many friends and customers. Many folks did not know his real name he was just “Jerky Jim.”

Jim requests no flowers, popcorn, or jelly beans, only one spray of assorted gladiolas, his favorite and a companion bouquet of mums. And please, no sad songs; he wants his memory to be joyful and happy as he lived his life.

Please make any desired contributions to the Children’s’ Village, 6200 N. Children’s Village Court, Coeur d’Alene, Idaho, as Jim requested. Since this is a long and lengthy, but still condensed life story, Jim requests the charges be made to his Visa Credit Card, with an “on site” personal collection of the fees, by whichever banker wishes to follow him.

Your browser does not support this video format. You should be able to view it in Chrome, Safari or Internet Explorer.
To order memorial trees or send flowers to the family in memory of James "Jerky Jim" Gaboury, please visit our flower store.
Send a Sympathy Card