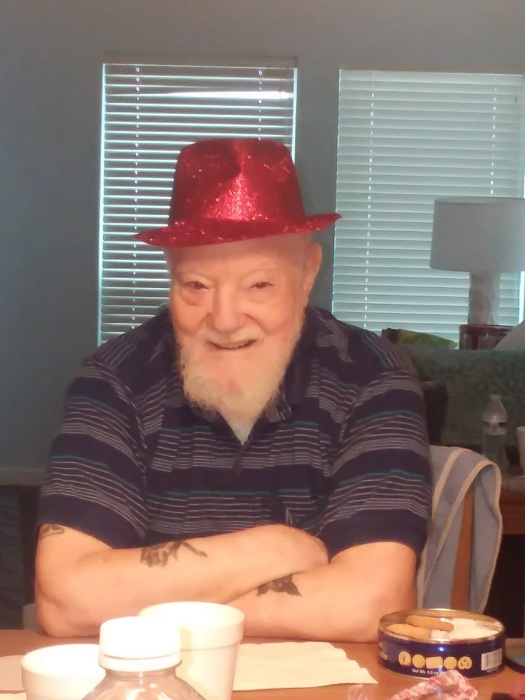 JOSEPH HENRY DOUTRE JR was born September 26, 1936 the first child of Joseph Doutre Sr. and Clara Davis in Ely, Nevada.  He grew up in Spokane, Washington and South Gate, and San Jose, California.  He attended North Central High School in Spokane then the family moved to San Jose, California where he attended Campbell High School.  His father was a very well-known gunsmith and Joe learned much at his father’s gun shop, where rifles were custom made to order with the measurements of the purchaser.

Joe joined the US Navy on February 15, 1955 and went to basic training at San Diego, California.  He spent 16 years in the Atlantic at sea.  He was assigned to destroyers as a machinist repairman.  He requested west coast assignments but, was always assigned to the Atlantic Fleet and was based in Gorton, Conn., New port News, VA and Providence, Rhode Island.  He completed his 20 years and retired to San Jose, California.

He worked for Food Machinery Co. FMC as a machinist in San Jose and at church he met and then married his wife, Sandra Cowgill on May 29, 1976. This last spring they celebrated 43 years of marriage.  They were not blessed with any children but, they share Sandy’s sister Susie (John) Wanlass’ 5 children, and 19 grandchildren all of Lehi/Saratoga Springs, Utah.

The stress of living in San Jose was causing problems for Joe because he had a traumatic brain injury from his service in the Navy.  He had petit mal seizures that were increasing from the stress of city living so they moved to Coeur d’Alene, Idaho in July of 1977.  They owned a large house in the Indian Meadows subdivision of Kootenai County and soon began taking in teenage foster care children from the LDS Social Services.  Over the years they had over 25 children stay with them at different times.  Joe was happy to help these kids in their time of need.

Joe worked various jobs in the area and was active in volunteering in his church at the dairy.  He was an assistant BSA scout master for several years in the early 1980’s.  Joe was a member of the Fraternal Order of the Eagles #486 in Coeur d’Alene and served as their president in the late 1990’s. He was also a member of the VFW 889 for almost 40 years.  He was a member of the Disabled American Veterans Ft Sherman Chapter 9, and the American Legion Post 143 in Post Falls.

Sandy would like to thank Kelly Chase from Comfort Keepers for many years of dedicated care for Joe.

Joe leaves his beloved Shih Tzu “Zeus” who misses him.  Joe is preceded in death by his father Joseph Sr. his mother Clara and his stepmother Bertha and a baby sister Carolyn.  He leaves his sister Delsa D’Amaro (Joe) of Napa, CA and his brother David of San Jose, CA.

Contributions in lieu of flowers are requested to be sent to Veterans of Foreign Wars 889 building fund 406 N 4th St Coeur d’Alene, Idaho 83814.

Services will be held at The Church of Jesus Christ of Latter-day Saints at 2801 N 4th St, Coeur d'Alene, ID, on Friday, December 6, 2019 at 11:00 a.m.  Joseph’s casket will be open for one hour prior to the service in the Relief Society Room.  Flag presentation and taps will follow the service by the Kootenai Veterans Council.  Interment will be at Washington State Veterans Cemetery, 21702 W Espanola Rd, Medical Lake, WA.

To order memorial trees or send flowers to the family in memory of Joseph Doutre, Jr., please visit our flower store.
Send a Sympathy Card