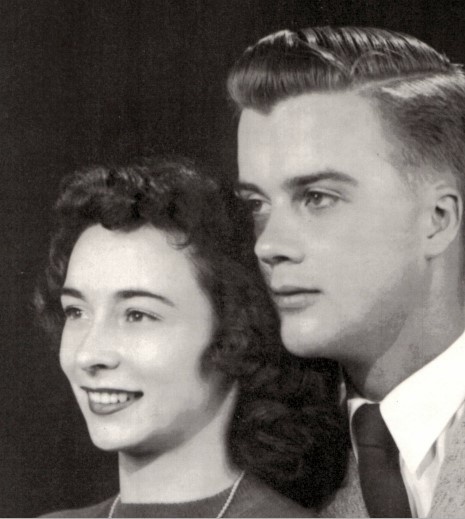 Joy Lorraine Wheaton passed away peacefully and joyfully, just as she lived her entire life, on May 9, 2022.  Her husband, John, before his passing on September 29, 2020, wrote an obituary for his beloved wife.  This is what John had to say about Joy:

“Joy was born on January 13, 1930 in Huntington Park, California, the only child of Dwight and Mabel Thuresson.  She grew up in El Segundo, California, which was a Standard Oil town.  The friendships she made during her childhood and through high school lasted a lifetime.  She and her friends reunited once a year for over 50 years!  Joy was a good student and an outstanding athlete who could have probably been on a professional women’s baseball, tennis or track team.

After finishing high school, Joy attended El Camino Junior College in Torrance, California.  Her education there was interrupted by the death of her father at an early age.  As she did often in her life, Joy tried to improve the world for the person closest to her, in this case, her mother.  In 1948, she quit college and they went to Palm Springs, seeking a way to recover from their loss.  After the winter season ended in Palm Springs, Joy and her mother went to Lake Tahoe where Joy got a job as a waitress. It was there that she met John Wheaton, her busboy, and their romance began.  It culminated with their marriage in 1950.  They lived a loving life together for more than 70 years.

For the first few years, Joy worked in various jobs while John finished his education at Stanford University and Columbia University.  When John joined the Navy and was at sea, which was most of the time, Joy gave birth to two children, and lived most of the time with her mother.  This was a good example of the wise saying, ‘It isn’t what happens to you, it’s how you react that matters’.  Being apart was clearly the hardest time in their marriage, but they made it through and they looked back at those ‘hungry years’ with good feelings.

After John rejoined civilian life, Joy gave birth to their third child.  She dedicated her life to being an outstanding mother and an exceptional wife. The kids all did well in school because that is what their mother expected.  Joy put her whole soul into making her children happy and loving and making them the best people they could be.  Her children’s success and happiness is a result of her role as a mother.

One by one, the children married and along came the grandchildren – eight of them!  One might think that Joy enjoyed being a mother more than anything else, but then she became a grandmother!  The grandchildren all seemed to feel that “Grammie” was the BEST and she made them feel that they were the BEST.  The grandchildren are all happy, highly motivated, and successful in what they do, while spending much time helping people less fortunate than themselves.

Upon John’s retirement in 1990, Joy and John moved from California to Coeur d’Alene, Idaho where they would remain for the rest of their lives.  They considered Coeur d’Alene to be as close to heaven as one can get. And then came the great grandchildren – six of them!  Together, Joy and John welcomed the first five, and with love, Joy welcomed the sixth great grandchild.

We will all miss Joy’s joyful spirit.  It was clearly the right choice when Joy (born Lorane) decided to rename herself Joy!  Together, Joy and John felt that they had been truly lucky in life, sharing lots of laughs, plenty of silliness and quite a few good-natured pranks along the way.  Joy believed strongly, that as a family, they had had a very good life and she was so proud of all of her children, grandchildren and great grandchildren, pronouncing “You are all kind of amazing!”.  In John’s words, “Joy started each day looking out the window and saying ‘I live in the most beautiful place in the world.’  When she could, she helped people who were in need.  She would say, ‘When I do something good, I feel good.’  She thrived on being the best daughter, the best wife, the best mother, the best grandmother and the best great grandmother.  Who could ask for anything more?”

In lieu of flowers, memorial contributions may be made to Schneidmiller House – Hospice of North Idaho  2290 West Prairie Avenue  Coeur d’Alene ID 83815.  A family celebration of life will be arranged for the summer of 2022.

To order memorial trees or send flowers to the family in memory of Joy Lorraine Wheaton, please visit our flower store.