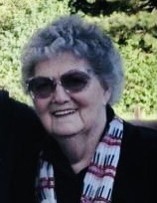 Juanita Laverne Anstine passed away peacefully at the  Schneidmiller House (Hospice of North Idaho) on April 9, 2021 at the age of 85.

She was preceded in death by her father and mother, Everett and Dorthy Lake, brother Norman Lake,

Juanita was born July 9, 1935 in Kearney Wyoming. Their family later moved to Hayden where she was raised. She eventually moved to Coeur d’ Alene with her husband Ike, where she raised her family and spent the rest of her life.

She worked as a checker at various supermarkets over the years including Albertsons, Buttreys and Tidymans. Customers loved going through her check stand because of her warm, outgoing and friendly personality.

At an early age, she began singing. She also would sing Karaoke at local bars with family and friends. Her voice was like that of an Angel with a touch of Patsy Kline. Singing for her was effortless and easy.

Later she began singing at church. She loved singing Hymns of praise for the Lord.  She sang at various  churches and events in the area, as well as for funerals and nursing homes. She became part of a band    called Jaunita and Friends with Don and Lil Washburn, and they performed at various places including regularly during the Gospel Jubilee at the Cd’A Senior Center. She also sang with The Ray Stone Band.

She loved her children, grandchildren, great grandchildren and her dachshunds so much, and always maintained a friendly relationship with her ex-husband. Juanita was well known, loved and active in the community, and had many friends. She became an avid quilter making many beautiful quilts.

A few years ago, she began showing signs of dementia and moved to Bristol Heights, where she was lovingly cared for by the staff there, and visited often by family and friends until COVID interrupted those visits.

In lieu of flowers, donations can be made to Bristol Heights or the Schneidmiller Hospice House.  The family wishes to thank both of those facilities for their excellent care.

To order memorial trees or send flowers to the family in memory of Juanita Anstine, please visit our flower store.
Send a Sympathy Card