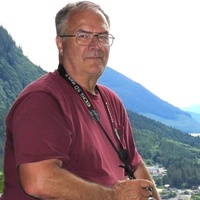 On Friday, Jan. 4, 2019, Kenneth Damian Montreuil, loving father, grandfather, brother, husband and friend, passed away at the age of 69.

He spent his childhood in Hayden Lake, Idaho, on five acres of heaven. When he was 12, the family moved to Coeur d’Alene. He attended Immaculate Heart of Mary School, graduating in 1968. He enlisted in the Navy for a tour of Vietnam. While Ken was in the Navy on a goodwill tour, he met his future wife, Stephanie, in Alaska. They began as pen pals for five years before marrying on Jan. 11, 1974. During their marriage, Ken welcomed three daughters into his family.

Ken made his home in Coeur d’Alene for the next 42 years. He worked for more than 30 years as a pressman for the Coeur d’Alene Press, before retiring and moving to Post Falls, Idaho.

Ken enjoyed taking photographs of family, friends and wildlife. So much so, that rarely would he be found in front of the camera, instead preferring to be the one taking the pictures. Ken also enjoyed building computers, woodworking, four-wheeling and spending free time with his family. While Ken preferred to stay home and enjoy the forests and lakes of North Idaho, he also enjoyed taking trips with his wife whenever she could convince him to go.

A Funeral Liturgy will take place at 6 p.m. on Friday, Jan. 11, 2019, at St. George’s Catholic Church, 2010 N. Lucas St., Post Falls, ID 83854. A celebration of Ken’s Life will take place immediately afterward for family and friends to come and share stories and memories of this wonderful man.