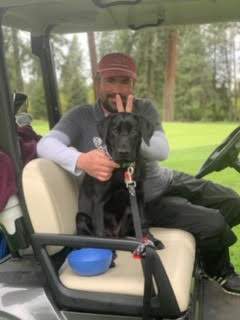 Kyle Patrick Carbery, 36, of Hayden Lake passed away on Tuesday, July 14, 2020, at Kootenai Medical Center after suffering a major heart attack on the night of Friday, July 10. Despite the heroic CPR efforts of a retired nurse and friend who was present when the heart attack occurred and the quick response of EMTs, the damage to Kyle’s heart and other organs proved to be too overwhelming. Kyle’s case was complicated by the fact that he tested positive for COVID-19 while at the hospital.

Kyle was born on June 23, 1984 in Spokane and spent the first two weeks of his life in the NICU after being diagnosed with spinal meningitis. From a young age Kyle had a love of sports, including playing goalie in both hockey and soccer. He also loved wakeboarding, snowboarding, and bowling. His lifelong passion and the foundation for his working life was golf. His grandfather, Gene Carbery, was the head pro at the Spokane Country Club for 40 years, and on his mother Lisa’s side, his greatgrandfathers, George Novotny, and Walter Wilson were avid golfers.

Kyle’s first employment was working at Wandermere Golf Course in Spokane where Kyle and his older brother, Sean, earned pocket change picking balls at the driving range. At the age of 9, Kyle entered his first Washington Junior Golf Association tournament. Sean worried that Kyle was too young and inexperienced for the tournament and it looked like he might be right when Kyle had to use all 20 balls in his bag to get past the water hazard on the very first hole of play. However, Kyle remained undeterred. He kept swinging through all nine holes and told his mother afterward how much fun he had. He continued to persevere to improve his game and became the first freshman at Mt. Spokane High School to make the varsity golf team.

Kyle enrolled in the golf management program at the University of Idaho before starting work as an Assistant Pro at the Hayden Lake Country Club under Head Pro Matt Bunn who, at one time had been an Assistant Pro for Kyle’s grandfather, Gene. Kyle was the Outside Service Manager at HLCC at the time of his passing.

Kyle loved all animals, especially an English Bulldog named London, and a black lab named Wallace. His favorite number was #41, for Dirk Nowitzki of the Dallas Mavericks. Kyle’s greatest joy was spending time with his nephew and godson Maverick Carbery.

A small private family service was held for Kyle on Thursday, July 23rd at Trinity Lutheran Church. A golf tournament will be planned for Spring 2021 to celebrate Kyle’s life when family and friends can safely celebrate his life.

The Carbery family wishes to thank all of Kyle’s many generous friends and his extended HLCC family who have contributed to Kyle’s GoFundMe account. Funds are being marked for establishing several charities along with a college fund for his nephew.

Our family says, “God bless all the NICU and ICU nurses for the attentive care they provide to their patients. They are truly special.”

To order memorial trees or send flowers to the family in memory of Kyle Carbery, please visit our flower store.