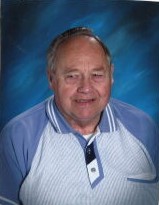 He was born on November 4th, 1940 to parents George and Marguerite Jones in Wilmington, Delaware. Larry was raised there with his brother, Wayne, and sister, Laura Lee. He completed high school in 1958 in Mount Pleasant High School. After graduation, he and enlisted in the United States Air Force and served for four years. In 1960 he was station near a town called Nez Perce, Idaho, where he met the love of his life, Gail Heston, on her family farm. Their first date was to see the movie “Lady and the Tramp” in theatre. From that day forward he knew he had found his future wife and they married in 1962 - they made their marriage last for fifty-six years through the rollercoaster of life.

They settled down to start a family in Nez Perce where Larry took a job working for the local school district and a graveyard shift at a cemetery. They had 2 children: a son, Aaron, and a daughter, Jo Anne. Larry then took a career opportunity at Kentucky Fried Chicken: first as a truck driver and later working as an owner at a store in Sacramento, California. In the early seventies he moved back to Nez Perce to help his father-in-law manage the farm. He worked various jobs that included: Green Giant, Schwann’s, and a maintenance manager for Whitworth College in Spokane, Washington.

Larry retired from Whitworth College and then began his golden years by traveling with his family. He enjoyed making trips to both the east coast as well as the Oregon coast. His most memorable trip was the road trip with his wife, daughter, granddaughters, and grandson. He drove them across the United States to the east coast stopping along the way at different American monuments and historical sites. This was a four-month American tour that made a lifetime of memories, full of laughter and joy for everyone. He loved walking his dog, and really enjoyed living on his son's farm helping him with various projects. Every Sunday he would help his daughter-in-law cook dinner and start each meal by saying grace before enjoying a family dinner with them.

He was a strong follower of Jesus Christ and raised his family with strong morals, values, and love for Jesus. Some of the churches he attended were: Grace Bible Church, Post Falls Baptist, and he found his home at North Country Chapel attending regularly on Fridays and Sundays for the last twenty-two years.

Larry enjoyed all the friends he made at church and found great comfort and support from them when he lost his wife in 2018 and his daughter in 2019. His favorite scripture was 2 Timothy 1:12 - For this reason I also suffer these things nevertheless I am not ashamed for I know whom I have believed am persuaded that He is able to keep that which I have committed unto Him against that day.

Family Motto: It Is Well with My Soul.

To order memorial trees or send flowers to the family in memory of Lawrence Jones, please visit our flower store.