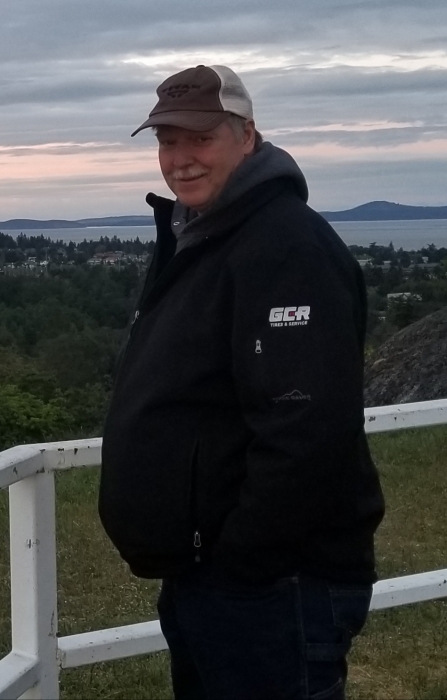 Mark Leonard Smith, age 53 of Spirit Lake, closed his final chapter in this amazing life and moved on to his eternal life with his Lord Jesus Christ on January 5th, 2020, surrounded by his wife of 25 years-Kristine, his daughter Ariel, Mother-in-Law Carla, and by the grace of God – his son Garett, by phone.

Born and raised in Spokane, Mark lived his entire life in the Pacific Northwest.  In his early years, Mark enjoyed a variety of sports but found bull riding to be his true calling (a visual his wife found quite amusing as he was such a big guy!)  Along with bull riding, Mark also enjoyed softball – something his daughter Ariel inherited from him. Priding himself as a master in slow pitch – he had what seemed to be a 20 minute hang time in his pitches – virtually impossible to hit!  Not being an avid runner – he could hit the leather off the ball just so he could trot around the bases (something else that made his wife giggle). Other favorite past times for this wonderful man included hunting with his father, snowmobiling with his step-father, and bowling.  Mark had always dreamed of joining the Senior Pro Bowling tour upon retirement – having bowled 3 300 games – 2 of which were sanctioned.

At the age of 17, Mark went to work busting tires at Eagle Systems.  In a career spanning almost 35 years, with his incredibly tenacious work ethic he was able to climb the corporate ladder to his final position of Regional Maintenance Manager.

Upon retirement, Mark went to work for the road committee for our HOA.  Plowing 26 miles of road riding in an archaic, barely running, duck taped together P.O.S can bring out the crazy in any normally sane person.  For Mark – it was even that much more fun. If after 12 hours of plowing, an ungrateful resident would come out and yell about being plowed in – you better bet that same resident would be drifted in till June.   On the flip side – Mark would always help out a stranded neighbor and give a quick swipe to ease the pain of shoveling 12 feet of Mother Nature’s finest.

Retirement was not lost on Mark.  He enjoyed many things – one of which was Facebook.  Early on, he used to stalk people through his wife’s account.  With his sarcastic sense of humor and sharp tongue – he would leave a spicy comment on someone’s post – only to have his wife find it and follow it up with “that wasn’t me – it was Mark!”  It only took a few years of apologizing and clean-up to make her realize that creating his own account and FORCING him to use it would be her only saving grace. From that point on – no one was safe.  No topic was off limits – his favorite of course was anything Trump! Nothing gave Mark more pleasure than tormenting a non-Trump fan by inundating them with all things “Make America Great Again”!

In living the life of leisure – Mark found a love of yard work and gardening that he managed to rope his poor unsuspecting mother-in-law into.  His angle was to drag her to the nurseries – buy a hundred or more flowers, bulbs, or starts – and then talk her into “helping” him plant. By helping – that almost always meant she would plant and Mark would sit on the tractor and supervise.  With a twinkle in his eye - his famous catchphrase was “There’s only one supervisor and that’s me” to which her reply was “I’m 75 years old – get off the tractor and plant your dadgum bulbs!”

Mark’s greatest joy was to watch his kids grow into the amazing adults that they are today.  Corey, having served in the U.S. Army, Garett, currently serving in the U.S. Air Force, and Ariel working at Lowes and finishing her college education in the medical field – he is so incredibly proud of who you are and the impact you will have on the world.  Rest assured that he is watching over you and will not miss a moment of what is to come.

Mark touched so many people throughout his time on this earth.  Towards the end he chose to accept Jesus into his life. With that decision came clarity, love, and a time to forgive.  It was important for Mark to keep positive impactful people around him, especially those who cared and supported him in his final days.  Mark is survived by many family and friends that he loved and that truly knew him, loved him, and somehow tolerated his ornery sense of humor.  Those that preceded him in death will welcome him home with open loving arms. Rest in peace my love – until we meet again.

For those that would like to join us in celebrating the beautiful life of Mark Smith - please come to Real Life Ministries at 1860 N Cecil Rd Post Falls, ID on Saturday January 18th, 2020 at 11:00 am.  In lieu of flowers, we ask that you make a donation In Memory of Mark L. Smith to Hospice of North Idaho, 2290 W. Prairie Ave. Coeur d' Alene ID 83815; who treated him with dignity and respect during his final hours.

To order memorial trees or send flowers to the family in memory of Mark Smith, please visit our flower store.