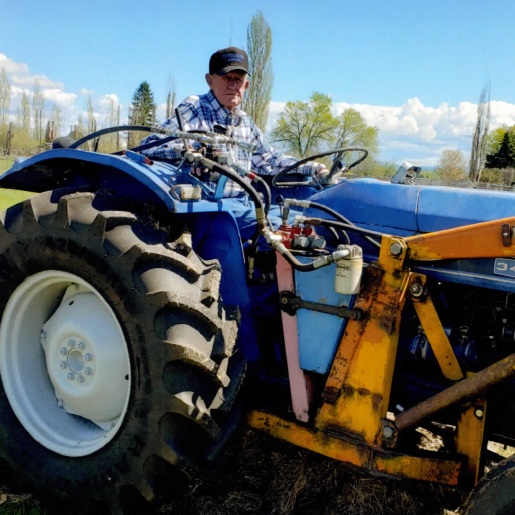 When Marv a young boy the family moved to the Spokane Valley where they had a small farm on Progress Road. He attended Central Valley High School. In 1954 he married Danielle Swenson and they had 4 children. Sadly they were divorced in 1963.

In the fall of 1963 he met June Ankney and they began their life together on August 14, 1964. In 1969 the family moved to Otis Orchards and started the life of a farm family. In 1980, they built a home on the Rathdrum Prairie. It was here that he continued his passion as a hay farmer and enjoyed custom farming, and raising beef, for family, friends and neighbors. He loved driving his equipment around his fields producing some of the finest hay in the county. Many customers purchased hay from him, some for as long as 30+ years.

He was also a flat track motorcycle racer, number 93, winning many races throughout the northwest. Some of his proudest achievements were being crowned champion in the over 60 year old, and over 70 year old divisions.

He was employed by the Great Northern/Burlington Northern Railway for 33 years. He retired in 1998.

Marv had many friends from all walks of life whether it be his railroad buddies, fellow motorcycle racers, neighbors, farmers or his Monday morning coffee group. He always had an opinion and you always knew where you stood with him. Some of his finest joys were a good political debate or discussing the news of the day. He also never missed an episode of “60 Minutes”.

The family would like to thank N. Idaho Hospice Care for all their care and compassion that was provided over the last few months. In lieu of flowers, the family suggests donations to N. Idaho Hospice or a Charity of personal choice.

Service to be held Friday March 18 at 11:00 AM at English Funeral Home, 1700 N. Spokane Street, Post Falls, ID. Viewing Thursday March 17 from 2:00 – 6:00 PM or directly before the service. A reception at the Funeral Home to follow. Private Burial.

To order memorial trees or send flowers to the family in memory of Marvin August Becker, please visit our flower store.
Send a Sympathy Card