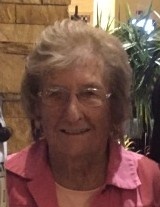 Mary Ann (Breen) McHugh was born on December 10, 1933 to Jerry and Geraldine Breen in Lewistown, Montana.  She grew up in Choteau, MT, and after high school attended Carroll College in Helena, graduating with a degree in nursing

Mary Ann married the love of her life, John McHugh, in 1955 in Choteau, Montana.  In 1957, they moved to Coeur d’Alene.  John worked with the accounting firm of H.F. Magnuson & Co., eventually becoming a partner in the firm that was later renamed Magnuson McHugh & Co.  Mary Ann was the rock of the family, raising six children and managing a busy household with love and understanding.  She stayed connected with her extended family and was a care giver when things were hard.  Her life was an example of love for others, faith, selfless service to those in need, and devoted friendship.  She and John were role models for her children, their spouses, and their grandchildren.

Mary Ann was an active volunteer her entire adult life.  Mary Ann and John were long-time members of St. Thomas Catholic Church and were active in organizing the creation of Holy Family Catholic School, which opened its doors in 1996.  She served in different capacities at St. Thomas Catholic Church and Right to Life Coeur d’Alene.  When her younger children were in high school, Mary Ann returned to nursing at Kootenai Medical Center in a variety of specialties, including oncology.  She was known there for her loving and compassionate care for patients and for making friends with co-workers.

Mary Ann was devoted to John and her family.  She is predeceased by her brother Bill Breen of Choteau, MT, and sister Patty Larsen of Helena, MT.  John died in December 2015 and oldest son Tim died in May 2017.  She is survived by Tim’s widow Ginni, Missoula, Barry (Teresa), Coeur d’Alene, Maureen, Helena, Terry (Laura), Post Falls, Julie, Coeur d’Alene, and Carolyn (Dave), Boyds, Maryland, fourteen loving grandchildren and one great-grandchild.

Mary Ann’s family asks that any memorial contributions be made to Right to Life at: https://righttolifecoeurdalene.com/

To order memorial trees or send flowers to the family in memory of Mary Ann McHugh, please visit our flower store.