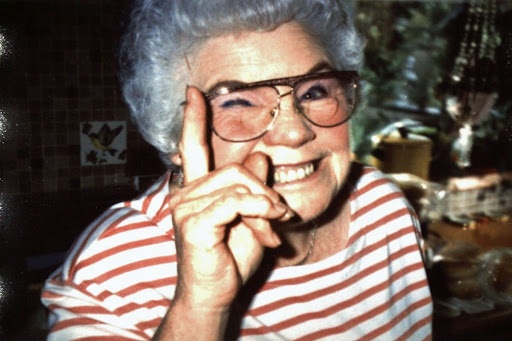 Norma Jean Smith Cook passed away Dec. 26, 2021, at Wellspring Meadows in Hayden at age 93. Heaven is brighter and lovelier with her added presence. She did not attend a prestigious college, earn important degrees or even invent anything. But she had an amazing gift — the gift of laughter — and it was highly contagious.

Her granddaughter Suzanne said that Grandma Norma was just like Lucille Ball. So true. Her personality is clearly visible in this picture. You can see the twinkle in her eye and her mischievous nature. She always had a quick and witty comeback, such as this one just a few days before she died. Her son was tickling her feet, trying to wake her up for lunch. She talked to him (“stop it, Bob”) and laughed. He asked her to open her eyes and so she opened one eye. He asked her to open the other one, to which she replied “later.”

Norma was born on Aug. 4, 1928 in St. Maries, Idaho. She was the seventh child of nine “miracle” children. Her mother, Mildred Rayner, came from England on the Lusitania on Sept. 18, 1914. Had she waited until 1915, she would have been on the Lusitania when it was sunk during World War I off the coast of Ireland on May 7, 1915. So the nine children are miracles.

Her father, Harold Alfred Smith, was also from England but had come over a few years earlier. They settled in St. Maries, ID, on a 160-acre homestead. They built a two-story log house and proceeded to raise children.

Norma married Ohmar Jennings on Aug. 12, 1945, and they settled in Wallace, Idaho. While there they had two children, Robert (1946) and Jeanie (1952). They subsequently lived in Avery, St. Maries, and Coeur d’Alene. She alternated between waitressing and being a grocery store checker in the early years and then spent the remainder of her working life as a checker. She worked at Redmond’s on 11th and Sherman, Rosauers and Tidyman’s on Best Ave. and also in Post Falls. She was the checker to whom you always wanted to go, even if it meant waiting a bit longer. She was good at her job, but more importantly, she was happy and funny and loved to laugh and make you laugh with her.

She had other wonderful qualities, too. She was an outstanding baker and we never seemed to go to her house but to find her just taking a pie (or cookies or a cake) out of the oven. When she lived in Wallace and times were tough for everyone, trucks came to town with government surplus commodities, such as sugar, flour, rice, beans, potatoes, cheese, etc. for people to come and get. Bob doesn’t remember ever going to get anything, but some of those who did would share with them. When they were given beans, Norma would make a huge batch of bean soup to share with others. Give her sugar and flour and she would bake goodies to share. She spent her entire life sharing anything and everything.

Norma was a super-fan of bingo. She had more ‘daubers’ for the cards than Carter’s pills. She also thoroughly enjoyed casinos and boy, was she lucky!! One time she walked up to a one-arm bandit, told “it” that she needed to buy winter tires, put in her money, and pulled the arm. One pull and she had all the money that she needed for great new tires.

Norma and Ohmar Jennings were married for 25 years and then divorced. She later married Jess Berry and they had 3½ years together before he died. Her third husband was Glen Cook. They were together for 17 years. Then Norma’s favorite cow “Daisy” provided a much needed rescue for Norma. When Glen took Daisy to the cattle auction while she was at work, Norma divorced him.

Norma Jean Cook was preceded in death by her parents, Harold & Mildred Smith, and by her eight siblings: Ivy (age 95), Woodrow (85), Winnie (98), Spec (82), Walter (23), Edward (68), Thomas (21) and Herbert (81). She is survived by her son Robert Jennings (Karen) and their children: Suzanne (Steve Zaruba), Sean and Julie (Tor Stjern) and by her daughter Jeanie Donald (Vaughn) and her children: Jon David, Danny (Tyanna) and Christina; also by 17 great-grandchildren and four great-great-grandchildren. She is also survived by nieces and nephews: Evelyn, Reggie and Carol, Betty Lou, Shirley, Randy and Roger. Norma will be so very missed by all of her family, her customers, her fellow bingo addicts, and her care-givers.

We give special ‘Thanks’ to the wonderful people at Wellspring Meadows for their loving care and to the staff at Auburn Crest Hospice for their caring help in her last few months. A special memorial service will be held in the summer (2022) in Coeur d’Alene for this very, very special and unique woman.

To order memorial trees or send flowers to the family in memory of Norma Cook, please visit our flower store.