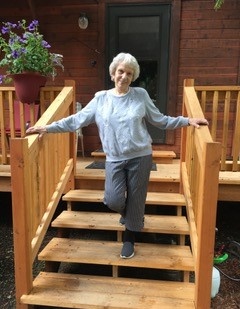 Patricia Joyce Brinkman Stachecki, 91, passed away January 24, 2022 after a brief illness. She was surrounded by family, as she peacefully slipped away.  She was born November 21, 1930 to William Frederick Brinkman II and Theresa Dolly Lisuzzo, in Detroit, MI. The oldest of four, she changed schools as her family moved about; finally graduating from Milford High School in Milford, MI.

Her first job outside the home, the year she turned 16, was working in the restaurant her father opened, called The Arcadia, located in Bay City, MI. During the year it was open, she worked in every job possible.  As a straight ‘A’ student her dream was to be a laboratory technician; however, she met the love of her life, George Peter Stachecki. From the moment they met, they were inseparable. Every day Dad sent Mom a love letter before they married on November 4, 1950. Together they raised 4 children in Clawson, MI.

In July, 1967, they moved across the country to Spokane, WA. In 1972, they opened Angus Meats Delicatessen;  not long after, it became Angus Meats, Inc. She would “quit” every Friday, so she could enjoy her weekends. Together they ran the business until they retired in 2000. Her favorite place on earth was the cabin they built on Bull Lake near Troy, MT.

She was much more than a homemaker: she was a self-taught seamstress, a business owner, construction supervisor, excellent cook, hostess extraordinaire and she definitely could have won the Wheel of Fortune! Not only was she the best daughter, mother, grandmother, great grandmother and friend - she was the best mother-in-law ever! She was a great role model to her entire family.

A funeral mass will be said in her honor at St. Pius X Catholic Church, 625 E Haycraft Ave, Coeur d’Alene, ID 83815 on February 26, 2022 at 11:00am, following a rosary at 10:30am. Lunch will be served. The following day a private family graveside service will be held at Greenwood Memorial Terrace, Spokane, WA. In lieu of flowers, you may wish to donate to the American Heart Assoc., the American Diabetes Assoc., or a charity that is near and dear to your hearts.

To order memorial trees or send flowers to the family in memory of Patricia Stachecki, please visit our flower store.