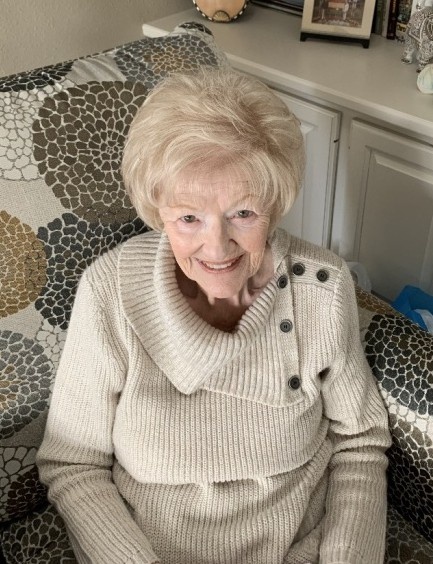 Penni Mahieu (born Harriett Josephine Cordes) was born August 21, 1935 in Chicago Heights, Illinois. She was the firstborn of her family, and soon Barbara, Judy and Bob came along.

Harriett attended Bloom Township High School in Chicago Heights, where she decided that she could no longer tolerate her original name (and the many teasing variations of it), so she changed her name to “Penni,” and it stuck. In fact, she was later known as “Perfect Penni” by her coworkers—and all who know her would agree!

Upon high school graduation, she thought about college, but the lure of working for the new commercial airline industry was strong. Penni (always a hard worker) thought she might be successful in such a novel business. Indeed, she was! Although her parents weren’t too sure about this wild idea, Penni was off to New York City.

Willowy, blond, with a bright smile and the gracious personality to match, Penni quickly became an asset to American Airlines, flying to Chicago from New York City, and back again. It was exacting and exciting (she did tell of having several of those “brace in place” experiences!). But she soon mastered the art of making air flight on a prop plane comfortable for every passenger. She could (and did) charm everyone from the most mundane to the likes of the Beatles, Richard Burton and Liz Taylor and other celebrities (in those days, wealthy people could rent an entire plane from American). Clearly, Penni was one of the best to have gotten those plum assignments! She was then promoted to training others, and then worked in public relations for American.

Not only was her career exciting; she made many new friends. One was Bill Snowden, who rented an apartment in her home base building in New York. He was from California, and as the relationship grew, Penni began to look westward. Once she and Bill married and made their home in Long Beach, Penni became active in the social scene of Long Beach, joining the Junior League and even creating a fashion show fundraiser like none other: She asked the famous costume designer Edith Head to be the “designer” for this show, and Miss Head accepted! She brought gorgeous costumes from current and past movies in which she had been head designer as part of the fashion show. It was a smashing success!

Penni and Bill were at the center of the Long Beach social scene, but Penni longed for a family as well. She and Bill adopted a baby boy whom they named Eric, and he was the light of Penni’s life. She loved being a mother, even in the difficult years after her marriage to Bill ended and she had to play the role of the working single mom.

Penni later re-met Lew Mahieu, whom she had known socially in Long Beach. They hit it off; Lew was a private pilot who loved to fly small planes into interesting (sometimes impossible) places! They married in 1984, and had a loving marriage until 2012, when Lew passed away.

Having long loved flight, Penni became Lew’s grand companion in flights short and long, smooth and rough—and a few flights that could only be described as, “I’m amazed that we made it out alive!” Lew owned a precision parts business and property in Long Beach, but the time came when it was better to move the entire shop to Idaho. They arrived just before Thanksgiving in 1995. Penni hit the ground running! She borrowed tables and chairs from the church, and put on a big Thanksgiving dinner for those employees who had moved to Idaho with them.

Penni and Lew both loved to work, loved to sing and they loved to fly! They sang at First Christian in Coeur d’Alene where Penni’s brother Bob was the pastor, and later at the Methodist Church in Hayden. The Mahieus often flew to Alaska, where they owned property and fished often.

Penni was Martha Stewart before Martha Stewart was born; she could create a fabulous party or turn a simple meal into a celebration. (Such celebrating often involved Prosecco!) Penni has been described by a grand-nephew as the “light in the room” and “the firecracker who loved people of all kinds.” Besides being a singer in many choirs over the years, she also discovered that she could be quite a card player, as well!

During this past year, Penni had the joy of being cared for by her son Eric and her dear friend Laurie Chambers. While her health failed, her bright spirit never faded. Knowing her determination to keep holiday celebrations lively, she likely was determined to have a happy Christmas and New Year’s before she left this earth—which she did.

She passed into the arms of Jesus late on January 11, 2021 with Eric and Laurie by her side. Her 85 years were filled with giving, serving, loving and (well, let’s be honest)—shopping. She loved to shop and always said, “After all, I might find something I just can’t live without!”

Penni was preceded in death by her parents, her first husband Bill Snowden, and her beloved, Lew Mahieu. She is survived by her son, Eric Snowden, her siblings Barb (Paul), Bob (Stelle) and Judy, as well as many nieces and nephews on all sides of the family.

A celebration of Penni’s life is planned for this summer, so please check back for updates.

To order memorial trees or send flowers to the family in memory of Penni Mahieu, please visit our flower store.