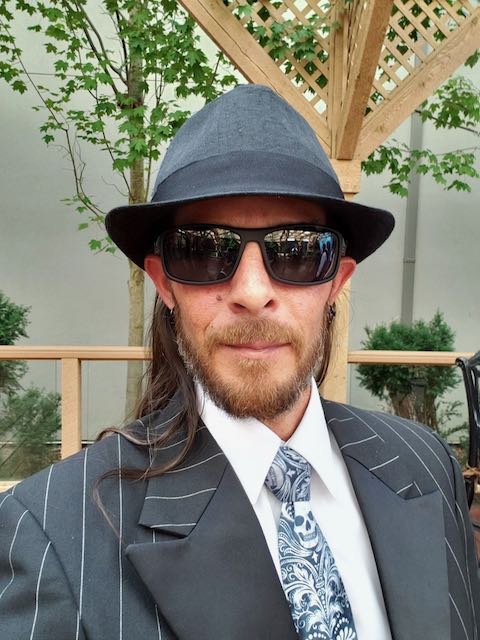 Randall (Randy) William Rockwell Beach
The world lost an incredible human on June 26, 2022, when Randy left us
while making International Sawdust in the Bahamas.
Randy was born June 28th, 1977, in Missoula, Montana to Deborah Ann
Withrow and Oliver Rockwell “Rocky” Beach. He graduated from Cusick
High School and had a passion for softball which he played for 6 years.
After moving to Spokane Randy earned a living being a stagehand, doing
various construction and landscaping at the CDA Resort, before perfecting
his craft as a finish carpenter. In 2007 Randy became a father to his
beloved daughter Brooklyn Beach.
He is survived by his mother Deborah Withrow, Wife Michelle Beach, and
Daughter Brooklyn Beach. He also leaves behind his Grandmother Gloria
Westwood, brothers Mike & Russell Beach, Sister Helen Beach, and Aunts
Andrea Hunt, Cheryl Wenrick, & Paula Mann. There are countless friends
and extended family that will undoubtedly treasure the times that they
shared with him.
Randy is proceeded in death by his brother Kenny & Nick Beach, Sister
Susanna Beach, and his Father Rocky Beach.
Many people knew Randy from his 25 years of playing Bass Guitar in the
Spokane Music Scene. He joined his first band as a Drummer before finding
his gift with the Bass guitar in Herban Disturbance, then moving on to
Stomping Grounds, Idiom, White Knuckle, Burnt Offerings, Invasive,
Routes, and was currently in Sword to Sunrise. Music was one of Randy’s
passions that fed his soul and loved playing whether on stage or just for
practice. Through his music, Randy made friends at a moment’s notice and
it was as if you knew him your whole life.
Randy's passion other than music, was his carpentry work. He loved to craft
things with his hands and loved making custom pieces small or large. He
had an eye for detail and the ability to take random objects (wood or not)
and turn them into amazing creations. He had an artistic flair that came
naturally.
Randy unknowingly met his soulmate at a festival in 2015, this encounter led
to a friendship before a whirlwind romance, and they wed in 2019. They embraced life together and traveled to California to watch his beloved San Francisco Giants, experienced their first Football game together (49ers &
Raiders a divided house) attended many concerts like Tenacious D & his
beloved Iron Maiden in Seattle, they loved to explore new cities by traveling
to different places and Cruising on Shiprocked. Together they transformed
Razzle’s Bar & Grill and started Randy’s Business Rockwell Carpentry.
His untimely passing left many goals, hopes, and dreams behind and left an
empty space in our hearts. Randy often said buy the ticket and enjoy the
ride. Embrace life and take the plunge, love and live while you’re here.
A celebration of life will be held at English Funeral Chapel, 1700 North
Spokane Street, Post Fall, Idaho Saturday, July 9th at 2 pm.
There is a gofundme website set up to help with the costs of bringing Randy
home and help family attend his services. https://gofund.me/7f5aa408

To order memorial trees or send flowers to the family in memory of Randall William Rockwell Beach, please visit our flower store.
Send a Sympathy Card