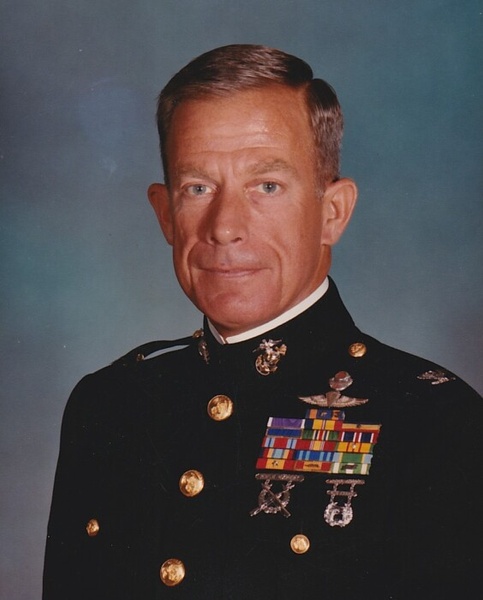 Robert E. Wakefield (also known respectfully as Col. K. R. Liston-Wakefield, USMC, Retired) died peacefully with his children by his side on September 29th, 2021, after a short battle with cancer. Bob was a distinguished military graduate from the University of California, Berkeley (1959), or Cal as he preferred it to be called. He was a graduate of the Marine Corps Command and Staff College and, with Highest Distinction, the Naval War College. His command and staff tours included Operations Officer at Battalion, Regiment, Division, and Fleet Marine Force; Commanding Officer of two Companies, two Battalions, and a Regiment; and Chief of Staff at Brigade and Fleet Marine Force Headquarters. Colonel Wakefield commanded two Reconnaissance units and, as a parachutist and scuba diver, pioneered the use of submarines for amphibious reconnaissance. He was involved in developing the Marine Corps Live Fire Exercise program in its present form. He saw combat service in Vietnam and was awarded the Purple Heart during the Tet Offensive and the battle of Hue City. During his tenure as Commanding Officer, 1st Battalion, 4th Marines, Colonel Wakefield was instrumental in the early development of Mechanized Combined Arms Team tactics. He continued that development as Commanding Officer, 3rd Marine Regiment (Rein) and is most proud of the two multi-battalion live fire combined arms exercises with tanks, designed and carried out by the 3rd Marines. These exercises prepared the Regiment for the role it was to play in Operation Desert Storm. Most important to the people he led, however, was Bob’s affinity for the rank-and-file soldier; he loved his Marines.

Bob was an avid reader of both military history and fiction, including books by such authors as Nevil Shute and John Masters. He also was the author of numerous articles on military history, tactics, and leadership to include: The German Generals 1918-1933, Queen Elizabeth’s Own Sixth Gurkha Rifles, A Fond Farewell: A Visit to the Solomon Islands, Training for Maneuver Warfare, and Personal Outdoor Equipment. With an almost phonographic memory, Bob could recall lines from his favorite books as well as from old movies, light opera, piano sonatas, cowboy ballads and long jokes.

After he retired as Chief of the General Staff, Fleet Marine Force Pacific, in June 1989, Colonel Wakefield attended Law School at the University of Idaho (UI) and graduated Cum Laude in 1992. Along with his law partner, he founded the firm of Wakefield and Dwelle in Moscow, Idaho, and was a supervising attorney in the Tribal Law Clinic at UI College of Law. The clinic and its students represented tribal members in Nez Perce and Coeur d’Alene tribal courts. Bob also volunteered as a judge in many UI College of Law competitions, including the Regional Mediation Competition in which law students from throughout the Western states participated. Bob often guest-lectured at UI in classes such as The Lawyering Process, Professional Responsibility, and the General Clinic. Bob’s law practice included general civil and criminal litigation, probate and family law, and, for twenty-six years, his firm served as general counsel for Gritman Medical Center. He gave generously of his time in representing pro bono clients and was professionally active in bar functions including the Ray McNichols American Inn of Court and the state and district bar associations. Bob was known within the legal community as a zealous advocate who maintained high standards of professionalism, civility and wicked good humor. For the last five years of Bob’s legal career, he served on the Coeur d’Alene Tribal Court of Appeals and as the Chief Judge in the Coeur d’Alene Tribal Court.

In addition to Bob’s many adventures in scuba diving, running, fly fishing, piloting, sailing, pheasant hunting, rock climbing, mountaineering, and world travelling, he also took a brief break in his legal career and served in Kunduz, Afghanistan, in 2007 for the State Department’s Justice Support Program. He was also a tireless advocate for the Veteran’s Administration and the Boy Scouts of America, of which he had been an Eagle Scout. Even with all that, though, one of his greatest adventures and acts of service was as ‘Firefighter Bob’ for the Moscow, ID, Volunteer Fire Department.

Bob will be missed by many and is predeceased by his first wife, Lysbeth B. Wakefield. He is survived by his sister and her husband, Diana and John Williams; his daughter and her husband, Vicki and Dennis Conway; his son and his wife, Scott and Margie Wakefield; his grandchildren, Allison, Brittany, Aaron and Kaia; his great-grandchildren, Gracie, Eila and Tatum; and his ex-wife and good friend, Dotty Pratt. In lieu of flowers, please send any tax-deductible donations to the Moscow Volunteer Fire Department Corporation at 229 Pintail Ln., Moscow, Idaho 83843. A memorial brick will be found at the National Museum of the Marine Corps (www.usmcmuseum.com).

To order memorial trees or send flowers to the family in memory of Robert Wakefield, please visit our flower store.