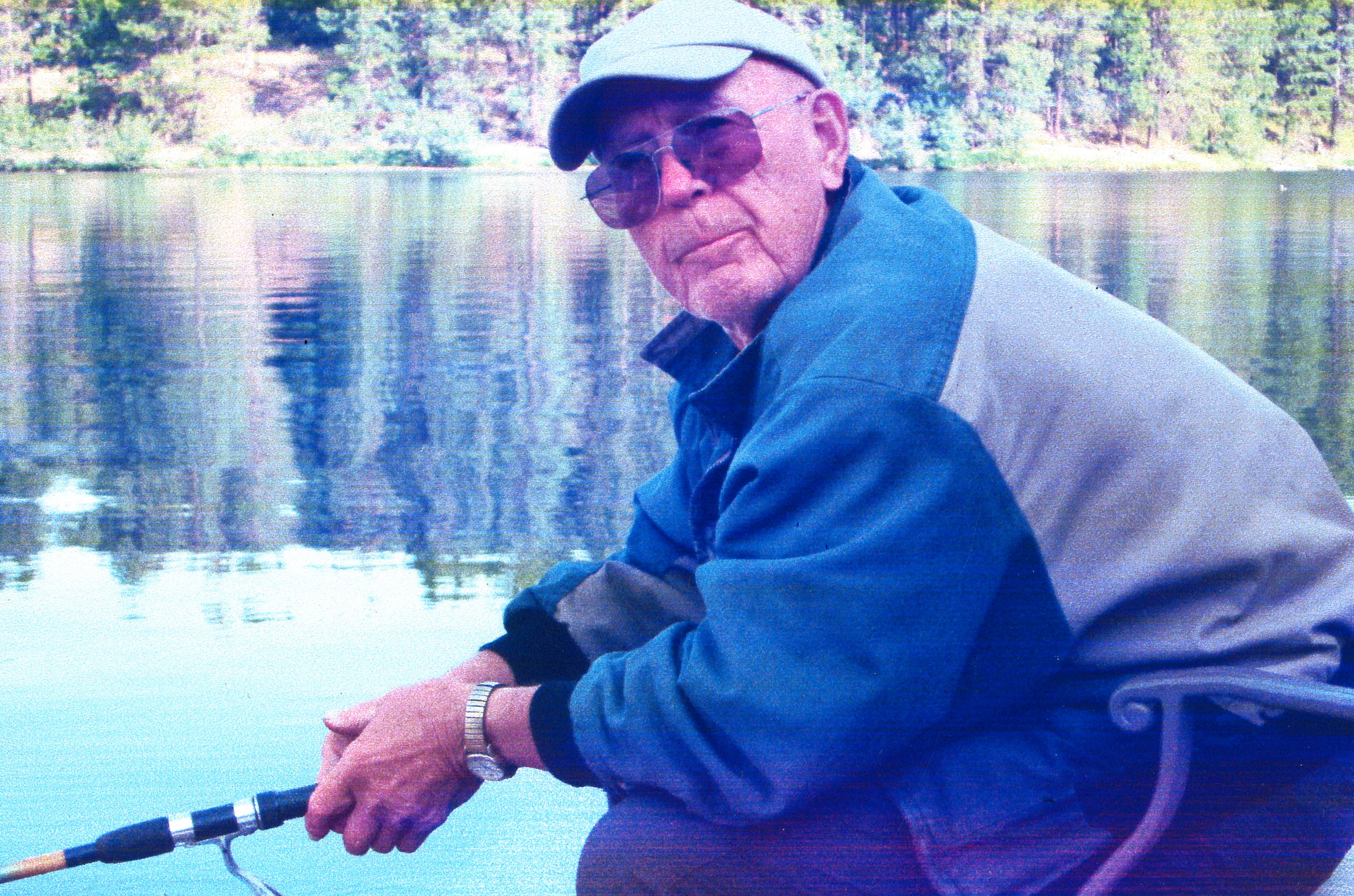 Roger Dean Hansen, 90, passed away on June 17, 2022 at Schneidmiller Hospice House in Coeur d’ Alene, Idaho. Roger was born October 7, 1931 to William and Elsie (Vehrs) Hansen in Aspinwall, Iowa. He was the middle child of eleven. Two sisters, Lois and Colleen, died at a young age from illness and his brother Glen died in a farm accident at the age of 21.  Roger’s grandparents had immigrated from Germany in the 1890s and neither of his parents, though they were born in the U.S., spoke English when he was little, learning from the children after they entered school.

At the age of two the family moved to Manilla, Iowa where Roger grew up and attended school. He got his first job in the 6th grade working in a factory that made archery targets, earning $.60 an hour that went directly to support the family. In high school he and his brother Marley worked together unloading coal from 50 ton railroad cars for $25 a car. Roger graduated from Manilla High School in 1949, which was a huge accomplishment as many young men didn’t graduate from high school, dropping out to help support their families.

In January 1951, one year after the U.S. had entered the Korean War, Roger enlisted in the Marines. He spent over a year in Korea but never talked about his time there other than to say it was the coldest he had ever been in his life. His tour of duty also included Japan and the Philippines, serving over a year aboard the U.S.S. General Anderson. After returning to the states, he served as a military prison guard at Camp Elliott in San Diego.  Most of his stories about the military were about his time in San Diego. He was discharged in January 1954, with the rank of Sergeant and received the Navy Occupation Service Medal, the National Defense Service Medal, and the Good Conduct Medal.

After his time in the Marines, Roger worked for the Milwaukee Railroad on a bridge crew repairing bridges across the Midwest and the Dakotas. This was hard manual labor and after a couple of years his brother Delmar convinced him to go to college and get a degree in education. Roger enrolled at Iowa State Teacher’s College (now Northern Iowa University) in 1955, attending classes during the day and working nights at the Iowa State Mental Hospital, mostly in the children’s ward. While attending college he met and married his first wife, Delores Luxford.  Their first child, Kurt David, was born in October 1957.  Roger graduated from college in August 1959 and started his teaching career at Newell, Iowa teaching science and P.E. and coaching football and basketball.

Roger’s football coaching style was one of strong leadership, discipline and toughness earning him lifetime respect from many of his players. In 1966, he led the football team to the school’s first state championship. He was invited to be recognized in the Iowa Hall of Pride in 2004 for his success with the West Branch program. Many of the team members of 1966 and other West Branch players have stayed in contact over the years with some traveling to Idaho to see “coach,” share memories and talk football. The current coach of the West Branch Bears announced shortly after Roger’s passing that the 2022 team would be wearing the initials RH on their helmets during this season to honor his memory.

Later on in his time at West Branch he taught the Core program.  This was a program for students that did not want to be in school.  Roger had an affinity for these kids and for keeping them in school. He taught them life skills that helped them finish their education and find success later in life.  Some of those students also have traveled to Idaho to visit him.

He left West Branch in the early 1970’s and moved to Winchester, Virginia. He worked in a donut factory for a short time and then purchased and ran a restaurant in downtown Winchester. He made several life-long friends while there including “Old Ed,” an elderly gentleman who had traveled the world in the Merchant Marines. They went for Sunday drives and shared many stories and adventures. After leaving Virginia for Idaho he made several trips back to spend time with Ed and continue their drives.

A 1977 call from the superintendent of the Coeur d’Alene School District brought Roger to Idaho.  The superintendent worked with Roger with the Core program in Iowa, and he asked Roger to come to Idaho to start a program to keep kids from dropping out of the Coeur d’Alene schools. Roger and his son Dirk moved to Coeur d’Alene in 1977.  Roger earned his M.Ed. in Educational Administrative from the University of Idaho during this time, graduating in 1982. Project CDA (Creating Dropout Alternatives) was developed and opened in 1979. The program was one of the first alternative schools in the state and was very successful at getting students back into school and helping them become graduates.  As principal of Project CDA, Roger found his true calling in teaching. He was a strict, no-nonsense leader with unconventional methods, a three strikes you’re out attendance policy, and a genuine love for these students. The attributes Roger brought to the program saved many who would not have succeeded in a traditional system. The school served as a model for many other alternative programs in the state and won many state and several national awards.

In 1994, Roger was 1 of 10 educators in the United States named as an American Hero in Education by Reader’s Digest Magazine. An article about him and the school appeared in the August 1995 issue of the magazine. He was always humble about this, and every award, giving credit not to himself but to having an outstanding staff. Many students still stay in contact and talk about the love they have for the school, for Roger and the staff, and how the school gave them the chance they needed to succeed.

Roger married Jean Ohl Wilson in 1994, and settled on their ten acre farm outside of Coeur d’Alene. He retired from the school district in 1996, and they spent 28 years together watching Jean’s daughter Kristi grow up and show horses, hosting family gatherings and hog roasts, and traveling to Seattle to see sons Kurt and Dirk and attend Seahawk games. They also enjoyed fishing for bass off of Bob’s dock and taking road trips to Montana to see family and tour the backroads.  He especially liked traveling Hwy 200 across Montana, finding the gravel roads with cattle guards, and making stops at old taverns along the way, including his favorite, the historic Jersey Lilly in Ingomar, Montana.

He enjoyed the beautiful green of the alfalfa he grew, raising steers for prime beef for his customers, setting up and changing sprinkler pipes, playing golf, telling stories, music on the deck (Merle Haggard, George Jones, Waylon Jennings, Dixieland Jazz, old time gospel, and polka), and hosting happy hour out by the garage whenever someone wanted to stop in for a visit.

He was diagnosed with Parkinson’s disease shortly after he retired. Being the strong and determined man he was he fought a valiant fight against its debilitating effects and did not let it deter him from doing the things he wanted to do and maintained an active life for many years after diagnosis. He was determined not to be wheelchair bound and retained independent mobility up until the week of his passing.

His greatest sorrows were the death of his son Kurt and of his brother Wayne. The greatest loves of his life were his two sons, Kurt and Dirk, his wife Jean, stepdaughter Kristi, his brother Wayne, his daughter-in-law Christina, his seven grandchildren, the young men he coached, and the students he taught.

He was a one-of-a-kind unconventional man, a defender and protector of all he loved, and a force in the lives of many young adults. He was well-loved and will be missed by many.

A private funeral service will be held with English Funeral Home in Post Falls in charge of arrangements.

“Roger’s Final Gather-up” and celebration of life will be held later on this summer for former students, staff and all others who wish to attend, date and time to be announced.