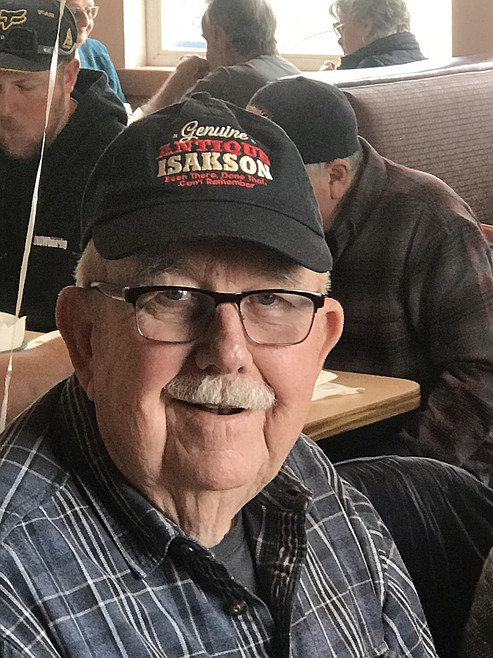 Ronald D. Isakson (Ron), 82, of Post Falls, passed away peacefully on Oct. 2, 2021, at Schneidmiller Hospice House. A memorial service will be held at 11 a.m. on Oct. 16, at Real Life Ministries in Post Falls, followed by a reception. Viewing will be from 5-6 p.m. Friday, Oct. 15, at English Funeral Chapel, 1700 N. Spokane St., Post Falls; and internment at 9 a.m. Oct. 16, at Coeur d’Alene Memorial Gardens, 7315 N Government Way. Arrangements are by English Funeral Chapels.

Ron was born in Billings, Mont., to Clarence and Sally Isakson on Oct. 15, 1939. He spent his childhood years in Montana and later moved to Moses Lake and then Richland, Wash. where he met and married Connie Isakson on July 10, 1965. His entire career was built around sales; and he spent his primary working years in real estate land sales and as a lumber broker.

Ron will be most remembered as the “greeter” at Real Life Ministries where he was seen at four services for a number years, connecting with people, giving the best hugs, and sharing his witty humor. His proudest moments were those when he was able to share the love of Jesus with others.

Hobbies included following business news and the stock market; tinkering in his shop; camping; hunting (he bagged many an elk); and trout or steelhead fishing. We think of him now in God’s celestial kingdom, standing in a crystal river with a golden fly rod, catching the biggest fish of his life.

Ron is predeceased by his parents, Clarence & Sally Isakson and is survived by his loving wife Connie of 56 years; his son and daughter Cory Isakson (Angela) and Vicki Isakson; his sister Mary McLachlan; his brothers Al, Gary (Marsha), and Bill (Darlene) Isakson; and his grandchildren, Astrid, Austin (Peyton), Elizabeth, Mariel, and Grace.

Memorials to Lewy Body Dementia Association @ https://www.lbda.org would be appreciated.

The family wishes to extend our sincere thanks to the staff at The Lodge Assisted Living, Drs. Melchiore, Britt and Lindblad and to N. Idaho Hospice. He has always had the best of care. Special acknowledgement to his ever-faithful friend Tim Thoms who promised Ron he would look after Connie; and to the multitude of other loyal friends.

To order memorial trees or send flowers to the family in memory of Ronald Isakson, please visit our flower store.
Send a Sympathy Card