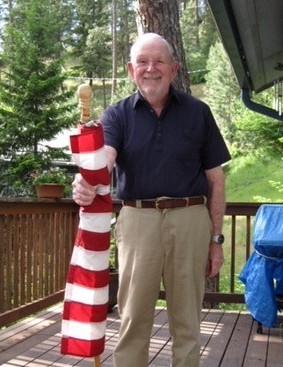 Ronald G. Kaeslin (Ron), 87, resided in Fargo, N.D. slipped the surly bonds of earth on 28 June 2020 at Riverview Place in Fargo. Ron had moved to Fargo to be near his daughter after living in Elk Grove California for approximately 35 years. He was in hospice care and was surrounded by his daughters and Riverview staff at the time of his passing.

Ron was born in McKeesport, PA to Herman and Helen (Alexander) Kaeslin.  He graduated from high school in Greensburg, PA. After high school Ron worked in drafting and highway construction where he was a highway foreman. He turned down an opportunity to attend West Point and joined the Air Force in 1952. Ron went to basic training followed by Officer Candidate School and became a navigator in 1954.  He flew in the B-36 and the B-52.  Ron had over 8,400 hours as a navigator during his career which included over 1,000 hours in the B-36 and 7,300 in the B-52 with the remaining hours in various aircraft.  He served during the Korean War, Vietnam and the Cold War, a career spanning nearly 30 years, which included many deployments to Guam, Thailand, and Japan. Ron served as a navigator, radar navigator, instructor navigator/flight examiner and Commander.

Early in his career, Ron met and married the love of his life, Patricia (Sullivan) Kaeslin, of Coeur d’Alene, Idaho.  The Air Force took them to many different places to call home throughout the United States as well as an assignment to Germany. During their retirement years, Ron built the beloved family cabin on Coeur d’Alene lake.  His attention to detail was unmatched, the cabin was perfectly square in all aspects, and with the help of lifelong friends, Ron and Pat’s dream came to fruition. They continued to enjoy their dream, even when Pat became seriously ill, and Ron became her primary care giver for 10 years.  He felt strongly about his marriage commitment and wanted to uphold the “for better or worse” part of that commitment.

Ron’s hobbies included time at the lake, fishing, and golfing. He was a true family man and throughout his life, family always came first, whether it was choice in Air Force assignments, traveling, camping, horses, and enjoying outdoor activities together.

He is survived by his daughters Lori Kaeslin and Tracy Kaeslin (Denise), both of Moorhead MN, his nephews Cliff Morris (Nell) of Ellijay,Georgia and Ronnie Morris (Debbie) of Pittsboro, North Carolina, great niece/nephews, several cousins and many friends. He was preceded in death by his wife, Pat, his mother and father, his sister, Doris, and his mother in law and father in law.

A service will be held on 17July 2020 at Boulger Funeral Home, Fargo ND at 10 am, officiated by Pastor Michelle Webber.  The service in Fargo will be live streamed for viewing. There will be a service 3 August 2020 in Coeur D’Alene Idaho at 1100, English Funeral Home followed by burial in Forest River Cemetery. The family requests attendees follow social distancing guidelines and wear masks at both services.

In lieu of flowers, the family respectfully requests donations be sent to Riverview Place, 5300 12th St S, Fargo, ND 58104. Please annotate the donations are “in memory of Ron Kaeslin”.

To order memorial trees or send flowers to the family in memory of Ronald Kaeslin, please visit our flower store.
Send a Sympathy Card