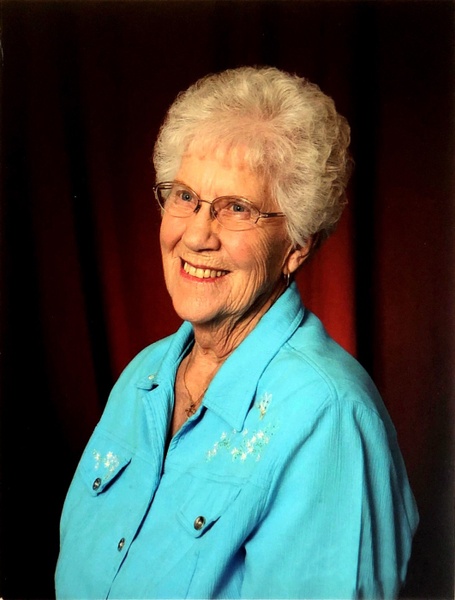 Ruby Jean (Gunderson) Benson daughter of Joris and Mary (Morgan) Gunderson was born on February 29, 1932, in Devils Lake, North Dakota. She moved with her family from Devils Lakes to various communities until they settled on a farm near Lakota when she was 10 years old. She attended Augustana Academy in Sioux Falls, South Dakota for her freshman year and graduated from Lakota in 1951. She was united in marriage to Earle Benson on July 29, 1951, in Lakota. Together they raised one son and three daughters. They lived in Milnor, Kindred, and West Fargo before moving their family to LaMoure, North Dakota, in 1960. She worked as a teacher’s aid and then school cook, helped with farm work, and raised Holstein cattle until they started spending winters in Arizona in 1996.

Ruby and Earle were charter members of the square-dancing club, The James Rivers Riders, and members of Zoar Lutheran Church and the Nazarene Church in LaMoure. Ruby stayed very active teaching Sunday school, hosting bible study, and helping at the Senior Center. From a very young age, Ruby always loved being around horses and continued that through her life camping and riding with family. She especially enjoyed any time spent with her 12 grandkids.

Ruby had a strong relationship with Jesus, and it was evident to those around her. She was thankful for opportunities to express her faith including a trip to the Holy Land and re-affirmation of her baptism.

In 2008 Ruby moved to Mesa, Arizona where she enjoyed time with siblings and traveled each summer to visit grandkids and great grandkids. She was united in marriage to Jack Terry on September 11, 2012.

Ruby died on Tuesday, September 14, 2020, in Coeur d’Alene, Idaho after a 3-year battle with Pancreatic Cancer. She was 88 years old.

Ruby was preceded in death by her youngest daughter, Illa Long; her husband, Earle Benson; her sister, Doris Jacobs; and her brother, Kenny Gunderson.

Services pending at a later date.

To order memorial trees or send flowers to the family in memory of Ruby Benson, please visit our flower store.