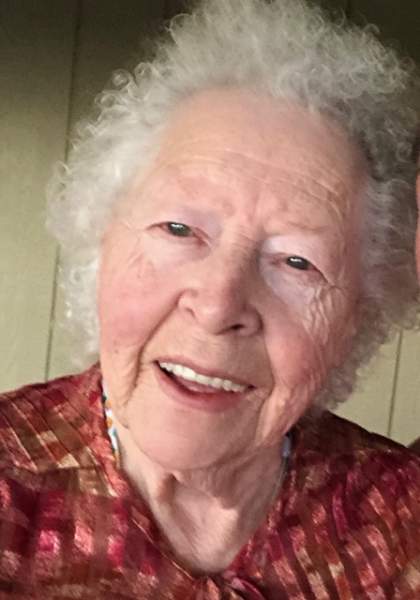 Ruby passed away February 20, 2019, in the Rathdrum home of her son, Steve Knight and his fiance, Elaine Harris. She had recently celebrated her 93rd birthday with a small, fun gathering. A dinner, gifts, many cards and good company made great memories for all. Ruby even learned how to play Bunco, debunking the myth about old dogs and new tricks!

Ruby was born February 2, 1926 in Roseburg, Oregon to Dewey and Clara (Shuck) McCuistion. She grew up with five siblings, Arthur, Manley, Frank, Geneva and Esther. A child of the Great Depression, Ruby honed many skills of survival and frugality, learning to garden, raise farm animals for food and glean from Mother Earth. Perfecting the talent to process and preserve the 'fruits of her labor' was a large part of Ruby's life.

Ruby married Jack Knight, June 22, 1942, in Vancouver, WA. She moved to the area shortly after, while Jack served in the war. After his return, nearly three years later, they lived in several homes locally, before moving to Cougar Gulch in 1948. Jack and Ruby had four children. She became a widow in 1982 after forty years of marriage. Ruby moved into Coeur d'Alene shortly after his death. Missing country life, she sold her city home and purchased a home on acreage, settling just outside Rathdrum.

The love of gardening and watching her efforts grow, was a joy for Ruby. Growing both vegetables to nurioush the body and flowers to nourish the soul, consumed her. She was either tending them or gleaning through seed catalogs, planning the next season of planting. She had a special talent for raising fruit trees from seeds. Her efforts continue to grow, in her former places of residence, providing fruit for many.

Always an optimist, Ruby and Elaine had been planning their garden and the addition of a berry patch. She lived life, even knowing her body was slowing down and her days were getting shorter. Death is a given, but she didn't let that get in the way of dreaming and hoping.

Ruby also enjoyed crafting and painting. A fan of Bob Ross, she spent many of her final days watching his videos. Two of her great grandbabies became fans and would watch with her. It thrilled her to see them enjoy something she loved. Hugs and kisses were also a joy for Ruby to give to the younger family members.

A special talent of Ruby's was water witching. To watch her walk properties with her chosen witching tool, a pair of pliers, spread just so, was intriguing. She dreamed of having another well dug, to 'just see if she was right', one last time. She knew she'd proven her gift, but still kept one more dream alive.

Ruby is survived by her children, Jackie (Jim) Storms, Susan Riesenauer, Carolyn (Sam) Taylor and Steve (Elaine) Knight and her brother, Frank. Twelve grandchildren and numerous great and great great grandchildren. Her niece, Janice and friend, Gloria were also very special to Ruby. She was preceded in death by her husband, Jack, her parents and siblings Arthur, Esther, Geneva and Manley.

A heartfelt thank you to Hospice of North Idaho, specifically her aide, Arin, nurse Katy, social worker, Alexa and Spiritual adviser, Jennifer. Special thanks to nurse Vicky, who along with Arin spent Ruby's last moments with Steve and Elaine. Many thanks to all the other dedicated Hospice professionals who answered our calls, when we needed support, and promptly visited when Ruby needed them.

No service is planned.

To order memorial trees or send flowers to the family in memory of Ruby Knight, please visit our flower store.