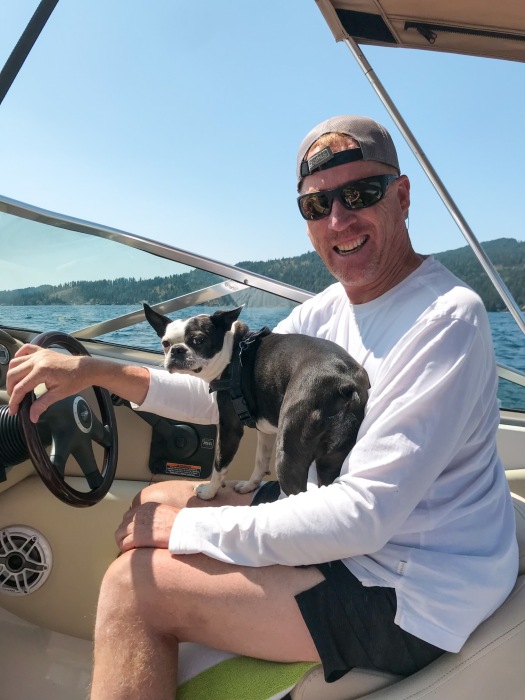 “The loss is immeasurable but so is the love left behind.”

So exactly how is one supposed to compose something so great? I don’t exactly know, although at this point I feel I am simply numb & moving through the motions. But I guess you just do your best and that is all one can truly do. So as I sit to finish what was started about a week ago, I find myself not wanting to submit, as to me that all seems so final, although we already know it is. However, on this day of Sabbath it does seem appropriate, as it is an incredibly beautiful fall day. Fall was one of Steve’s favorite seasons with its crisp air, the brilliant color transition of tree’s, building a fire in the fire pit, looking forward to Thanksgiving & all of our blessings and of course, football. So as I cut Steve’s last Hungarian Hot pepper from his plant, prepare the yard for winter and gaze into the bright blue heavens above, I believe I am now prepared to complete and submit – So here it goes with my entire heart invested…

Steven Bruce Halliday entered this majestic world October 2nd, 1964 in Spokane, Washington to Bruce and Shirley Kay Halliday, and was raised in the family home on Government Way in Coeur d’Alene, Idaho.

Steve graduated from CHS in 1983 after leading the mighty Vikings at quarterback to their very first Idaho State Championship. They were 12-0 and set 7 team and individual game records that glorious day in November. It was a team Steve was incredibly proud of and where life-long friendships were forged.

Steve met Jan (Wendell) in 7th grade at Lakes Junior High. Young, wild and free, their relationship and friendship grew over the years and at the age of 16, Steve presented Jan with a “promise ring” which was purchased at Clark’s Jewelry with hard earned money from lawn mowing, Park & Rec softball and baseball scoring, and by selling night crawlers to the fishermen who passed the by family home on their way to the lake. Steve and Jan married April 12th, 1986 and moved to Corvallis, Oregon to complete their education and where they both graduated from Oregon State University – GO BEAVS! Careers kept both Steve and Jan in Oregon over the next 14 years. It was in Beaverton, Oregon where Steve’s successful insurance career began. And also where his most significant title was earned: FATHER. Once both girls were born, Steve felt truly complete and it was then he wished to move closer home to be with family and to raise his kids in the wonderful small town & community he grew up, as that was the most valuable thing to Steve. In 2000, the Halliday family made the move back to their hometown and never did look back. He established a solid home and business. Steve’s business legacy includes an office and support staff that was family. He prided himself in knowing his clients, greeting them in person with a genuine smile & a handshake, and with many of them being multi-generational. Steve was a man of incredible work ethic, high integrity and was fiercely loyal & protective – All traits he instilled within his family.

Steve filled his home and community with life. He enjoyed travel (especially Mexico), fishing, boating, kayaking, tending to his yard, barbequing, loved music along with quiet meditation with his Bible.

Steve was a man of God and a man of faith. He was committed to his family, friends and community. He gave his time to the Hayden Lake Rotary, which included to a trip to Africa to establish wells for the impoverished (something Steve was incredibly proud of) and also to the Lake City HS Booster Club & “X The Text”. Steve was always compelled to help others. He was a man extraordinaire who was a father, husband, son, brother, uncle and cousin. He was compassionate, sensitive and caring. He put family first with his loyalty, devotion & dedication to them. Steve never missed a family event, he was the first to paint nails, style hair, attend Thanksgiving lunches at Dalton Elementary, assemblies, Father/Daughter dances, academic recognition, dance recitals, band concerts, the girls’ many, many soccer, basketball and softball games. He valued his friendships which truly spread across the country to include co-workers, acquaintances, friends of friends and the dear friends of his kids whom he embraced as his own. Seeing his children grow & prosper was the highlight of life for Steve. The open door that was provided to all and the open table conversations with Steve’s incredible barbequing skills, where cell phones and technology were set to rest for those moments of deep conversation, questions of life and just learning about each other’s journey and OH the laughter, and perhaps this will be missed most of all!

Steve was proceeded in death by his father, Bruce Halliday and his father-in-law, John Wendell. His mother Kay Halliday-Millsap passed away just 11 days after her beloved son. Steve is survived by his wife and soulmate, Jan Halliday and two daughters, Alexa Jean Halliday (Houston, TX) and Capriel Dior Halliday (Boise, ID), his brother Duane Halliday, his mother-in-law Kate Wendell, his stepfather Bill Millsap, and brother & sister-in-law Jon and Linda Wendell and nephews and nieces: Connor Halliday, Skye Halliday-Wilson, Chloe’ Halliday, Sara Wendell and Mike Wendell. As well as numerous aunts, uncles, cousins and friends whom he thought of and valued as family.

Into your hands I commit my spirit; deliver me, Lord, my faithful God – Psalms 31:5

Our family wishes to extend its gratitude and appreciation to the dedicated & hard working staff and hero’s at Kootenai Health. The care that was provided is appreciated beyond measure. Thank You for your dedication and compassion in extremely difficult and gut wrenching situations – You truly amaze US!

“When we lose someone we love we must learn not to live without them, but to live with the love they left behind.”

“Don’t cry because it’s over. Smile because it happened.” – Dr. Seuss

The Man in the Arena

"It is not the critic who counts; not the man who points out how the strong man stumbles, or where the doer of deeds could have done them better. The credit belongs to the man who is actually in the arena, whose face is marred by dust and sweat and blood; who strives valiantly; who errs, who comes short again and again, because there is no effort without error and shortcoming; but who does actually strive to do the deeds; who knows great enthusiasms, the great devotions; who spends himself in a worthy cause; who at the best knows in the end the triumph of high achievement, and who at the worst, if he fails, at least fails while daring greatly, so that his place shall never be with those cold and timid souls who neither know victory nor defeat." - Theodore Roosevelt

To order memorial trees or send flowers to the family in memory of Steve Halliday, please visit our flower store.
Send a Sympathy Card