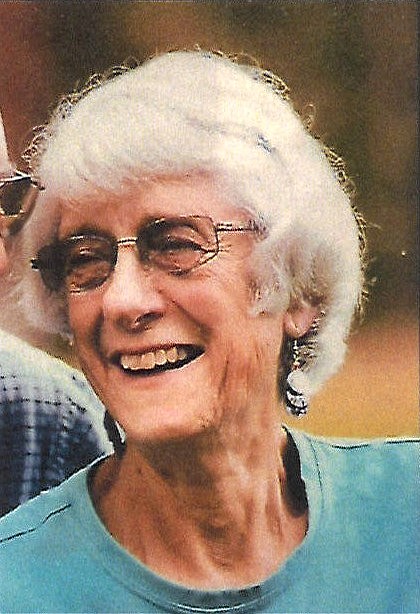 Terry passed on Thursday, March 31. She was born in Gunnison, Colo., on Nov. 29, 1937, to George and Alice Burnett. Terry had a twin sister, Sherrilyn, and younger brother, Keith.

She was preceded in death by her husband of 52 years, Charley, and is survived by sons, Eric (Becky McAlister), Andy (Elizabeth Escamilla), and Garth (Kristin Piumarta); and 10 grandchildren (Kaelan, Joseph, Tristan, Alexis, Ethan, Owen, Aidan, Austin, Daniel, and Payton).

Terry was raised in the Bay Area of California. After graduating from high school, she spent time working through several colleges before graduating with her bachelor’s degree from Oregon State University. She later earned her master’s degree in Home Economics and took a job teaching in Visalia, Calif. The story goes that Charley wooed her with drives up from Southern California, where he worked for the Forest Service with the line, “I’ll bring the steaks if you’ll cook them.”

Terry spent many years as a homemaker during Charley’s career in the Forest Service and adapting to caring for three fast-growing boys in the diverse landscapes of a mountainside in Milford, Calif., the heat of Phoenix, Ariz., the cold of Butte, Mont., and finally to beauty of Coeur d’ Alene, Idaho. Terry’s educational background meant the boys grew up with homemade sourdough bread, fresh-baked cookies, which made for good trading stock at lunch time, and baked goods for breakfast on weekends. In Coeur d’Alene, Terry returned to the world of work as a seamstress before beginning many years in the Coeur d’Alene School District at Lakes Middle School, working in the library and office before retiring in 1997.

Terry was an avid quilter. She was a member of several North Idaho quilting groups, and all in the family knew better than to plan anything for the few times a year a quilt retreat was scheduled with her quilting buddies. Charley commented after they both retired at the end of 1997 that he didn’t know how she ever found the time to work on all the quilting projects she had. Terry always had a quilt project going. The family is blessed to have Terry’s legacy live on through the quilts she made to commemorate significant life events such as weddings, new grandchildren and graduations, as well as the many quilts and wall hangings Terry made for the sheer enjoyment of the art.

To order memorial trees or send flowers to the family in memory of Terry Miller, please visit our flower store.
Send a Sympathy Card