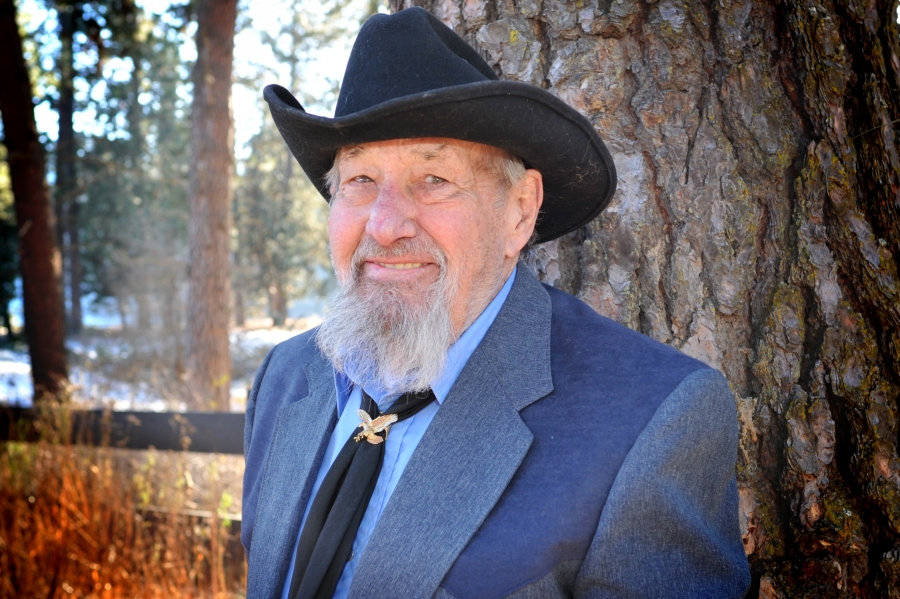 Coeur d’Alene lost one of its most colorful, talented and entertaining residents when Ted Nelson passed away on August 28th at age 91.  Always one to give more than he took, he volunteered with cancer patients at Kootenai Medical Center, helped out at the Hospice Thrift Store, mentored disadvantaged teens, organized square dance competitions throughout North Idaho and helped his neighbors in need.  Ted moved to Coeur d’Alene 30 years ago after retiring from 25 years of teaching elementary school children in Alaska and California. He was happy to call Idaho home.

Theodore “Ted” Nelson was born and raised on a farm in New England, North Dakota.  He joked that he was responsible for The Great Depression since the stock market crash of October 29, 1929 happened during his birth year.  One of five children born to Minnie Parker Nelson and Nels Theodore “Ted” Nelson, he was the youngest and only boy.  This meant he was the one working the fields with his father, learning how to till, plow, plant and harvest.  Pulled from farm life when his family sold the farm, he enlisted in the Navy at age 18 and served as an aviation electrician on aircraft carriers from 1947-51.  He remained on active duty at the start of the Korean War and was honorably discharged.

Ted married Victoria Reno Nelson in 1953 and they had three children. They had many adventures together, which included moving their family from Southern California to Alaska driving the unpaved AlCan Highway in the dead of winter, a distance of over 3000 miles. Ted’s other adventures included working summers as a security guard in costume at Disneyland; fixing and flipping homes on Balboa Island during the California real estate boom of the 70s; and touring with his family all over Europe in the summer of 1970 in a VW van. Ten weeks, ten thousand miles and 19 countries. Europe on $5/day was checked off the bucket list.

He could repair anything – from toasters and washers to refrigerators and lawnmowers.  He was an avid woodworker, leather craftsman, banjo picker, clock maker and stained-glass artisan.  But his favorite pastime was restoration of his beloved antique tractors which he collected while living his back-to-the-farm dream on a small acreage in Dalton Gardens from 1993 – 2005. Like they say, you can take the boy out of the farm, but you can’t take the farm out of the boy!

With hardy Norwegian genes - or maybe it was the lutefisk and lefse - Ted lived life on his own terms.  He loved square dancing, baseball - especially the Mariners – and telling jokes.  He shrugged off being preceded in death by part of his colon, a section of his liver, most of his heart’s left ventricle and a large percentage of his lungs’ capacity with quick witted humor that endeared him to his family, caregivers and total strangers.

Ted was married and divorced twice.  He remained friends with both women for the rest of his life.  First wife of 30 years, Victoria, was there to help him this past year and stayed at his bedside in his final hours.  Ted was married to Judy Gershwin Nelson for 15 years during the square dancing and farming days in Coeur d’Alene.

Now free of his earthly body, Ted will be the one in heaven stopping to change a flat tire for a stranded motorist, mowing his neighbor’s lawn for free and sharing his meal with a homeless person.

To order memorial trees or send flowers to the family in memory of Theodore Nelson, please visit our flower store.
Send a Sympathy Card