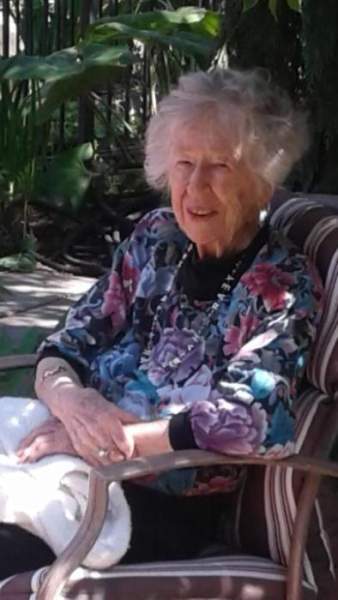 She was a descendant of pioneer stock, born April 7, 1923 in Weston, Idaho to Leslie Dawson and Florest Whitney.  She was the third of 7 girls in the family:  Elva, Elene, Larae, Varral, Valear, and Leslie.

She grew up working the family farm in the Weston area and married Stanley Zysk on December 20, 1943 in Glendale, California.  Stanley served thirty years in the Air Force and was a veteran of several wars.  Therma stood by his side and held down the fort at home while he was away.  She continued as a homemaker using skills she learned from her mother cooking and crafting.

Therma moved to Coeur d'Alene in 1971 following Stanley's retirement from the military.  She has been a resident of Coeur d'Alene ever since.  She was an active member of the Church of Jesus Christ of Latter-day Saints, becoming the oldest living member of her ward.

She is survived by her two sons and daughters-in-law Stan and Carolyn Zysk of Klamath Falls, Oregon, and Mike and Melissa Zysk of Wheatland, Missouri, 9 grandchildren, 15 great grandchildren, and 1 great-great grandchild, and sisters Elene Bradford of Renton, Washington and Leslie Shupe of Murray, Utah.

A graveside service was conducted by English Funeral Chapel at Forest Cemetery on January 8, 2020.  A memorial service will be held at a future date to be announced at the Coeur d'Alene Stake Center of the Church of Jesus Christ of Latter-day Saints.

To order memorial trees or send flowers to the family in memory of Therma Zysk, please visit our flower store.