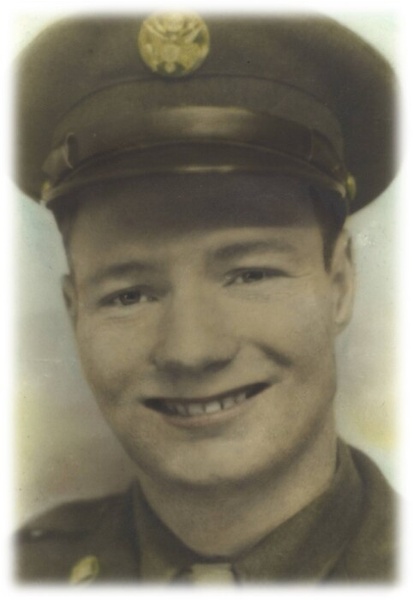 Vernon was born on September 30, 1928 in the Nettleton Gulch area of Coeur d’Alene, Idaho to Clarence and Rosa (Dennison) Hitchcock. He had three brothers, Byron, Fred and Elmer. When Vern was 4 years old, he and his family moved to the Gibbs area. When he was 6 years old, Vern went to Winton Elementary.

As a child, one of Vern’s favorite toys was a little wooden gun that his mother made for him. He called it “beeb beeb gun” and took it with him all over! People would say “Here comes Vernon with his beeb beeb gun!” and even started to call him “Beeb”. The name stayed with him.

When he was young, Vern and his friends used to sneak down to the river during recess to go swimming. Vern liked to fish, hunt deer and gather wild mushrooms. He also liked to pick huckleberries. As a young man, Vern worked for Coeur d’Alene Laundry. He also worked in Spokane as an elevator operator.

At age 17, Vern joined the Army and was a prison guard in Germany. When he came back home, Vern worked in Oregon for J.C. Compton for 3 years, where he laid oil on the roads.

On June 28, 1952, Vern married the love of his life, Betty Rose Braden.  Betty and Vern had two sons Clifford and Mike Hitchcock.

After that, he worked for R.E.A. Vern also worked at the Coeur d’Alene garbage company for 30 years. Later, Vern worked for Rutledge Lumber (which became Potlatch Lumber) for 20 years. Vern retired when Potlatch sold the lumber mill in 1997. On his last day of work there, he broke his leg.

When Vern retired he like to cook. He made good breads, cookies, and his favorite thing was to smoke fish.

Vern is preceded in death by his parents, Clarence and Rosa (Dennison) Hitchcock, his brothers, Byson, Fred, Elmer, and his son, Mike Hitchcock.

To order memorial trees or send flowers to the family in memory of Vernon Hitchcock, please visit our flower store.