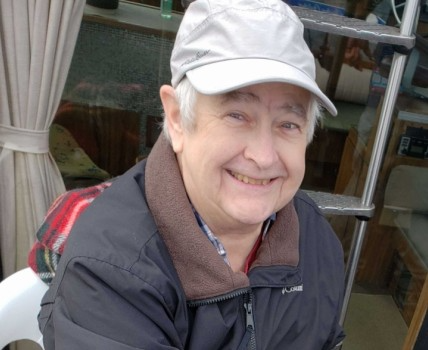 William Michael Mertens, age 71, of Post Falls, Idaho will be greatly missed by his surviving family members. He joined his family that has gone before us on October 20, 2020 after a long fight with Progressive Supranuclear Palsy.

William was born in Spokane, Washington on December 8, 1948 to Melvin and Herberta Mertens. He grew up in Coeur d’ Alene, Idaho with his six brothers and sisters and many, many cousins. They loved fishing together and spent many summers at Neah Bay on the Washington coast fishing for salmon. He loved hunting and fishing with his dad and friends which continued throughout his lifetime. A long awaited trip in 2019 to Alaska with his girls brought joy, laughter and precious memories. Bill enjoyed life and his laughter and humor were seen by many in the form of practical jokes, full of love. Family and friends were very important to him, including his many four legged friends.


William graduated from Central Catholic High School in Yakima, Washington, in 1967. He attended Yakima Community College then the University of Washington where he studied business.


In 1971, William met Jana Floyd at Pay ’n Save, where he was the camera manager, and they were married in 1973 in Kennewick, Washington. They had 4 daughters who are their pride and joy. He was so proud of his girls and their accomplishments in this world.


Bill and Jana moved frequently during their 47 years of marriage but settled for several years in Roundup, Montana, when they purchased a hardware store in 1991. Over the years, they worked hard and expanded it into a larger General Store. He retired in 2005.


In 2011, Bill and Jana relocated to Clancy, Montana, where they lived in the Elkhorn Mountains. He loved listening to the elk bugle and enjoyed the wildlife around them. He spent countless hours pulling dandelions and spraying weeds on their property. When Jana retired in 2018, they moved to Post Falls, Idaho, to be closer to their family.


Bill was a member and president of the Rotary and very proud of the work they did.  He was also proud to be a lifetime member of the National Rifle Association.


He is survived by his wife and three daughters Joy (Tracy), Dawn and Traci, four grandchildren; Bradley (Mary), Alyssa, William Jack, and Lauren, his siblings; Mary Ann (Ed), Barbara, Marji (Pat), June (Rick), Terry (Mary), and Chris (Christine). He is also survived by his mother-in-law Jeanne Floyd Richmond, and many other beloved family and friends. He was preceded in death by his parents and his daughter, Alethea Jeanne, who died 47 years ago on the same date as her father, October 20.


Bill loved his country and was pleased to support the military and all first responders. He would be pleased to have donations in his honor given to Wounded Warriors.

To order memorial trees or send flowers to the family in memory of William Mertens, please visit our flower store.