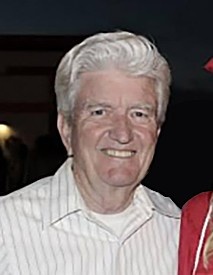 
William Edward Thompson Jr. was a hard-working and loving grandfather with a great sense of humor. When you were around him, he never failed to make you laugh. Grandpa was a light-hearted man who never complained about life. Instead, he was joyful and content.
Growing up, his four grandchildren individually spent quality time with him. He made each of us feel like we were "the favorite grandchild." I (Kaitlyn) remember their old house in the City of Orange, California fondly, and the sleep overs I'd have on the weekends with grandma and grandpa. Grandpa worked nights at the post office. When he came home from a late shift, he would wake me up to split his McDonald's Big Mac with me.
Whenever we were together, Grandpa teased and joked with us, but we teased him too! I (Kaitlyn) remember a time at the old house in Orange when Grandpa fell asleep on the couch for the night. I had a stuffed bear that recorded our voices. I decided to record myself snoring and pretend it was him. I played the recording the next day for him, and he believed me!
Grandpa was always such a good sport and never got annoyed or irritated with us. He was there for us no matter what we needed. I (Daniel) remember every game day grandpa would be there to watch me play football. Even if it was raining or snowing, he was there the whole time. We spent almost every Sunday watching the NFL together. He was a die-hard Washington Football fan, even after they changed their name! Every other day he wore one of their hats or shirts!
Every time Grandpa and I (Emily) were together, he always, without a doubt, had three top phrases he'd repeat to me:
"Thank you, thank you very much" (in an Elvis Presley voice)
"Don't tell grandma."
"I have cookies in the pantry."
You always knew he was near if you saw chocolate chip cookies, potato chips, and Pepsi cans lying around. Grandpa would sneak me (Madelyn) chocolate chip cookies before dinner even though he knew grandma would disapprove. We would eat them together like it was a top-secret mission giggling at the fact that we were breaking the rules.
Grandpa was such fun and always kept the four of us laughing. We will miss him dearly. We will never forget the memories we made together with him. We love you, grandpa, and we hope you're happy.
Rest In Peace.

To order memorial trees or send flowers to the family in memory of William Thompson, please visit our flower store.